We asked alumni to share a favorite winter memory of their time at Mayo Clinic in Rochester, Minnesota. They reminisced about below zero temperatures, car spinouts, snowstorms in May, drive a rusty company car to make home visits and learning to embrace winter. We chose the best of the best from the entries to receive prizes.

‘Thought I knew what winter is’ 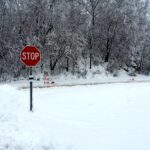 “I traveled the world, I lived in the Northeast and Europe, where I thought I knew what winter is. Well, it wasn’t until 2013, one year after I moved to Rochester, when I redefined my understanding of winter; that included two straight weeks of temp below -10 degrees F and a snowstorm of epic records … in May!”

‘I spun the car out’

“My wife and I both grew up driving in snow elsewhere in the U.S., but nothing prepared us for the weeks and weeks of sub-zero temperatures that often come along with winters in the Upper Midwest. One winter during my residency we had a particularly bad polar vortex that turned our neighborhood streets into an absolute ice rink. While hurrying to turn through a yellow light on my way to work, I spun the car out, making several complete rotations before coming to rest embarrassed at the far edge of the intersection. As I sat in the peaceful dark winter stillness, I felt an overwhelming gratitude to get to live and work in such a beautiful place. I also felt grateful to be an anesthesiologist and driving to work hours before anyone else might’ve been in that intersection!”

‘Favorite winter photo from 50 years ago’ 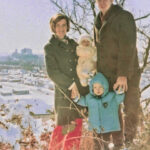 “This is my favorite winter photo from 50 years ago of my family with Rochester and the clinic in the background. I set up my camera on a tripod and used the timer to take this photo for our Christmas card in 1970. Notice that the only buildings on the skyline at that time were the Mayo Building and the Plummer Building.

“I grew up in Springfield, Missouri. When I graduated from high school, my plans were to embark on a 15-year endeavor to return as an orthopedic surgeon to the Ferrell-Duncan Clinic that my father co-founded. When I was in grade school, I read a book about the Mayo brothers and, from that time on, I had the ambition of completing my education at Mayo Clinic. In addition to that dream, I wanted to join my father in his practice, a dream that I’m sure was similar to that of the Mayo brothers, who wanted to join their father’s practice. My dream came true and was better than I could have ever imagined.

“One of my most memorable experiences was when I had the opportunity to care for Mrs. Henry Plummer when she fractured her hip. She was in her 90s and had a very sharp mind. I sat with her when I made rounds and listened to her talk about her husband and her uncles Will and Charlie Mayo. You can imagine what must have been going through my mind when I was having personal conversations with Daisy Plummer, my patient, wife of Dr. Henry Plummer, niece of the Mayo brothers, and sister-in-law of E. Starr Judd, M.D., and Donald C. Balfour M.D., two of the seven founders of Mayo Clinic. This experience, in addition my incredible experience during five years at Mayo, instilled in me an even greater commitment to carry on the Mayo brother’s legacy of quality, scientific and caring medicine with the dedication that their careers embodied, in return for the opportunity I was given to further my medical career at the clinic that they and their father started.

“I returned to the Ferrell-Duncan Clinic in Springfield in 1977 after internship and residency at Mayo and two years in the Air Force. I watched the clinic grow from 17 physicians to the over 200 we have now representing 28 specialties. 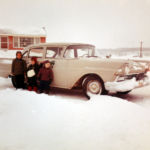 “During my fellowship at Mayo Clinic in the early 1960s, we were supplied with a Mayo Clinic car (note the logo on the side), to make home visits when we were on call.

“As you will note behind my three children, it was a somewhat rusty Ford!

“It was a real challenge in the heavy snow, not to mention that I was somewhat intimidated when required to see the families of fellow residents and even staff members!

“Nonetheless, it was a marvelous learning experience.”

“My first year at Mayo, people kept telling me about how hard winter can be for someone who just moved to Minnesota. It was very common to hear daily opinions about the cold days coming and the darkness. Many people gave me advice about winter gear and even recommended to buy a light device for the darker months.

“In this context, I joined a new unit in December. In the workroom, I found a big sign that stated ’26 days without fall.’ I commented to my co-workers, “Wow! People in this unit really dislike winter and count the days since autumn ended.’ One of the nurses replied, ‘Not really; this is a geriatric unit, and we take pride in our hard work regarding fall risk and prevention!’ Everyone laughed.”

‘A force of nature that commands respect’ 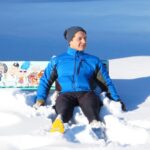 “You won’t know exactly what I’m talking about here until you experience a winter in Minnesota. Seriously. If pedestrian subways and skyways aren’t a telltale for you, let me assure you they’re there for a reason.

“Coming from sunny South America, I was definitely not prepared for a Minnesota winter. I had spent winters in North America, but winters in the Northeastern United States, while chilly, don’t  quite compare to the Northern Plains.

“2013 was a particularly harsh winter. Temperatures dropped below 0 degrees F (-18 degrees C) on multiple occasions. Native Minnesotans would tell me this was a bad one, even for them. I figured I had really lucked out. But the same Minnesotans that empathized with my rough introduction to winter in the Great North also offered hope. For instance, some colleagues at Mayo Clinic would put things in perspective for those who voiced their desire to go south. “There’s an entire country above us,” they would say while staying perfectly poised. “True,” I thought to myself. I then started to pay closer attention to the commonalities that made Minnesotans and Canadians embrace the winter and make it part of their lives instead of a chunk of the year they’d rather not deal with.

“I then made it a point to continue with my life undeterred by external factors like the weather. Being an avid runner, this meant keeping up my weekly run. For those familiar with the area, my 7-mile run would start near the Saint Marys campus and continue to Quarry Hill Park, passing by some of the city’s most iconic views, including the downtown Mayo Clinic campus, Rochester Art Center, Mayo Park and Silver Lake. However, only once have I had to cut my run short, and it was the day I decided to run at a temperature below 10 degrees F. I suppose that’s the cutoff for me. Twenty minutes at that temperature cuts to the bone. Your face literally hurts, as does every exposed part of your body. I admitted defeat that day and retreated to the comfort of my apartment.

“I learned my lesson that day. Winters in the Great North are a force of nature that commands respect. I courageously embrace winters anywhere now, having been humbled by my first Rochester winter.”