Raising the bar on evidence-based neurosurgery

Christopher Graffeo, M.D. (CTSA ’19, NS ’21), didn’t proceed directly from college to medical school. He didn’t pursue a pre-med course of study at the University of Virginia in Charlottesville. Rather, he studied literature and philosophy, played in a band and edited the alt weekly news magazine. He moved to New York City and became editor-in-chief of an arts journal. He loved the backstage perspective on new culture but grew became frustrated by the marketing aspects of the job. He knew he’d reached a crossroads. His physician father suggested volunteering in an emergency room, which. Dr. Graffeo says was some of the most insightful advice he’s ever received.

“I felt like I found a home I didn’t know I’d lost,” he says. “I loved the academic community of physicians; the practical, problem-solving approach to care; and, of course, the human element of working with patients.”

Dr. Graffeo says he gained important skills in the four years between college and medical school that serve him well in neurosurgery. “You’d be surprised at the similarities between being a waiter and bartender and being a doc. You talk to people who are different from you, recognize that your goals aren’t always aligned with theirs, understand what the other person wants to happen, and multitask. If you can handle 10 tables at dinner, you can handle a pager and the emergency department.”

Dr. Graffeo also gained beneficial skills in his editorial role. “My big contribution to science probably won’t be designing new drugs or devices,” he says. “I’ll leave that up to the clinician-scientists. My priority is, of course, to be an excellent neurosurgeon, but I think my avenue for serving the community will be in designing, curating and amplifying quality scientific work. For example, I’d love to edit a neurosurgery journal one day.”

“I think my avenue for serving the community will be in designing, curating and amplifying quality scientific work. For example, I’d love to edit a neurosurgery journal one day.”

For his own research, Dr. Graffeo received the 2020 Donald C. Balfour Award for Meritorious Research from the Mayo Clinic Alumni Association. His research focuses on improving clinical and translational science for the treatment of complex cranial disease —focusing on the development of novel strategies to improve efficacy, safety and evidence-based study of stereotactic radiosurgery (SRS). Dr. Graffeo studied a dosimetric parameter called the biological effective dose (BED) that estimates the risk of radiation-induced injury after incorporating a time correction factor that accounts for DNA repair during irradiation. Although technically challenging to model, BED optimization may significantly improve treatment efficacy and toxicity. Dr. Graffeo performed a novel analysis of BED in patients with growth hormone-secreting adenomas that underwent single-fraction stereotactic radiosurgery — the first true clinical cohort study of its kind.

Dr. Graffeo has 119 peer-reviewed publications, including 30 first-authored and 37 second-authored publications during his residency. Many of them were highly cited and have resulted in awards. A recent publication describing Mayo Clinic’s stereotactic radiosurgery experience and strategy for Spetzler-Martin Grade 2 arteriovenous malformations was awarded Editor’s Choice in Neurosurgery. He has received the Rhoton, Best Basic Science Abstract and Poster of Distinction awards from the North American Skull Base Society; Resident Scholarly Achievement Award and Paper of the Year award from the Department of Neurosurgery at Mayo Clinic in Rochester; Spine and Spinal Cord Injury Resident Research Award from the Congress of Neurological Surgery; and Piepgras Award for best scientific presentation from the Minnesota Neurological Society.

Dr. Graffeo says the quality of research in neurosurgery faces several challenges, including the low disease incidence and the stigma of randomizing. “Trials can be tough in many areas of neurosurgery: Most of the diseases we treat are uncommon, and most patients don’t want you randomizing decision-making with their brain operations. By the time you  accumulate enough patients to answer the question, the standard-of-care has shifted. My main goal in pursuing the master’s degree was to learn some of the more sophisticated statistical and epidemiologic tools that can help bridge the gap between randomized trials and simple observational studies.

“Mayo Clinic excels at empowering trainee research and allowing us to design research programs that are tailored to our career goals. Today, the gap between laboratory neuroscience and neurosurgery are tremendous.  I’m excited to be part of the movement to close that gap.”

Michael Link, M.D. (MED ’90, NS ’96), Department of Neurologic Surgery and one of Dr. Graffeo’s mentors, is confident his protégé will achieve his intention: “Dr. Graffeo’s findings in the biologic effective dose (BED) in the stereotactic radiosurgical treatment of pituitary adenomas has dramatically changed how neurosurgeons and radiation oncologists think about dose and the likelihood of achieving tumor control without new endocrinological or neurological deficits.” 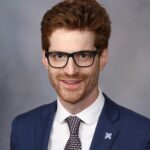