Brent Larson, D.D.S., is president-elect of American Association of Orthodontists 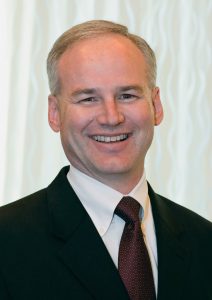 Brent Larson, D.D.S. (ODON ’90), professor and director of the Division of Orthodontics at the University of Minnesota School of Dentistry and a practicing orthodontist in Rochester, Minnesota, has been elected the 2017-2018 president-elect of the American Association of Orthodontists (AAO).

The AAO is the world’s oldest and largest dental specialty organization, with more than 19,000 members in the U.S., Canada and abroad. Dr. Larson was the AAO’s  and secretary-treasurer for 2016-2017 and has been actively involved in organized dentistry and orthodontics throughout his career. He is a past president of the Minnesota Association of Orthodontists and Midwestern Society of Orthodontists.

Dr. Larson has served as educational liaison to the editorial board of the American Journal of Orthodontics and Dentofacial Orthopedics and as a reviewer for Practical Reviews in Orthodontics. He has received the Distinguished Dental Alumni Award from the University of Minnesota, the Fredsall Distinguished Service Award from the Minnesota Association of Orthodontists and Teacher of the Year Award in the Department of Dental Specialties at Mayo Clinic. He is a member of the Mayo Clinic Teachers’ Hall of Fame.

Dr. Larson graduated from Gustavus Adolphus college in 1978. He earned his D.D.S. from the University of Minnesota School of Dentistry in 1981. He completed a general practice residency in dentistry at Sheppard Air Force Base in Texas. He served as a general dentist at Plattsburgh Air Force Base in New York and as chief of orthodontics and quality assurance coordinator at Torrejon Air Base in Spain. Dr. Larson earned a master’s degree in the orthodontic residency and education program at the University of North Carolina at Chapel Hill.

Prior to joining the faculty of the University of Minnesota School of Dentistry, Dr. Larson was the orthodontic program director at Mayo Clinic and assistant professor in the Department of Dental Specialties.