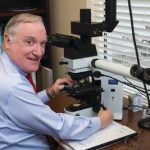 Charles Perniciaro, M.D. (D ’87, DMP ’93), received the inaugural Excellence in Dermatopathology award from the Florida Society of Dermatology and Dermatologic Surgery (FSDDS). He was chosen based on a vote by the 500 members of the FSDDS.