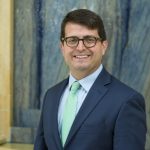 Christopher Destephano, M.D. (MED ’11, GYNM ’17), Department of Obstetrics & Gynecology at Mayo Clinic in Rochester, received the IRCAD (Institute for Research into Cancer of the Digestive System) Award for Excellence in Education for his paper, “Establishing Validity for the Limbs and Things Laparoscopic Hysterectomy Trainer.” He received the award at the American Association of Gynecologic Laparoscopists 46th Congress on MIGS (Minimally Invasive Gynecology Surgery) in Washington, D.C.

The IRCAD award recognizes the best research in education, acknowledging innovative ideas in teaching. Dr. Destephano will travel to Strasbourgh, France, to participate in a one-week course in minimally invasive surgery at the European Institute of Telesurgery, University of Strasbourg, thanks to a grant from Karl Storz Endoscopy.

Dr. Destephano graduated from Mayo Clinic School of Medicine in 2011. While he was a medical student, he completed a master’s degree in public health from Emory University in Atlanta, Georgia. He completed a residency in obstetrics and gynecology at Johns Hopkins in Baltimore, Maryland, and a fellowship in minimally invasive gynecologic surgery at Mayo Clinic School of Graduate Medical Education.