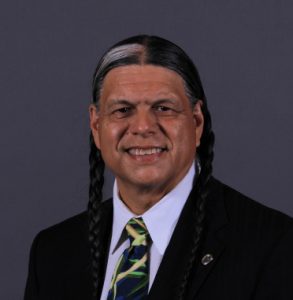 David Baines, M.D. (MED ’82), received the 2016 President’s Award from the Alaska Federation of Natives (AFN) for outstanding contributions to their families and the Native community.

Dr. David Baines was raised in Metlakatla, Alaska, and is a member of the Tlingit and Tsimshian Tribes. Now in his 33rd year of practice, he is a family medicine physician in Anchorage, Alaska, and is affiliated with Providence Alaska Medical Center. Over the course of his career, Dr. Baines has worked in family practice for the Coeur d’Alene Indian Reservation in Northern Idaho, the Nez Perce Tribe in Idaho, a community health center for American Indians and Alaska Natives in Seattle, Washington, and the Iliuliuk Family and Health Services center in Unalaska/Dutch Harbor, Alaska. He has seen more than 500,000 patients and delivered more than 1,000 babies. He also served as a faculty member at the Alaska Family Medicine Residency and as a clinical associate professor at the University of Washington.

Dr. Baines has been recognized for his efforts to incorporate traditional medicine into modern healthcare and to promote health and wellness among American Indians and Alaska Natives on a local and national level.