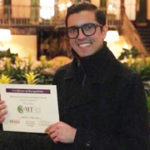 Gabriel Martinez Galvez (BME ‘19), a fourth-year Ph.D. student in the Biomedical and Physiology track in Mayo Clinic Graduate School of Biomedical Sciences, won the 2018 3-MT competition sponsored by the Midwestern Association of Graduate Schools at the group’s annual meeting. He bested 35 other students who had won a 3-MT (3 Minute Thesis) competition at their local graduate schools.

3-MT competitions require participants to describe their Ph.D. thesis work in a layperson format with one visual element and a compelling verbal description lasting less than three minutes.

With a combination of humor, storytelling and simple comparisons in his presentation, Martínez-Galvez confessed to a boyhood obsession with superpowers and a grad-school obsession with the potential for enhanced abilities through genetic engineering. Gene editing could be used to achieve countless benefits, such as accelerated healing, HIV resistance and cancer therapy, says Martínez Galvez.

Comparing genetic information to a Word document, Martínez Galvez said he wants to prevent genetic typos that increase the chance of disease when modifying organisms. To develop a more accurate and dependable “keyboard” for gene editing, he programmed a computer to read gene editing data, learn from it, and identify the underlying reasons behind genetic typos. By automating the processing of massive amounts of data, he hopes to speed engineering of a keyboard that can predict and auto-correct genetic typos.

Before entering the competition, Martínez Galvez was already a believer in the value of communicating research. “There is a disconnect now between the public and the scientific community,” he says. “It’s important to get your message across. Communicating using the right language for the right people can move your ideas forward. Science is cool, and we have to able to talk about how things work.”

Martínez Galvez says the enthusiastic response to his presentation makes him want to complete his research more quickly and pursue a career that takes advantage of his ability to captivate an audience.

“I’ve always thought of myself as more of a communicator or teacher than a scientist,” he says. “I’m more motivated when I have to deliver information, especially for the lay person or a student.”