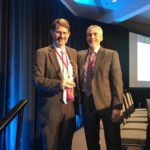 Dr. Winters is a professor of laboratory medicine and pathology in the Mayo Clinic College of Medicine and Science.