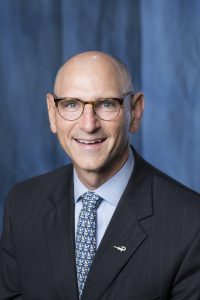 Kevin Behrns, M.D. (MED ’88, S ’95), is the new vice president for medical affairs and dean of the Saint Louis University School of Medicine. He oversees the educational, research, clinical and service activities of SLU’s nationally ranked School of Medicine. Dr. Behrns reports directly to SLU’s president and is a member of his cabinet.

Throughout his career, Dr. Behrns has been dedicated to educating the next generation of academic surgeons and has received numerous awards for teaching and mentorship. During his tenure at the University of Florida, annual funding from the National Institutes of Health to the surgery department tripled, making it the 18th most NIH-funded department of its kind in the country. Additionally, the Department of Surgery’s annual revenues and number of outpatient visits grew by more than 25 percent under his watch.

Dr. Behrns received his first R01 grant more than a decade ago. His areas of research include liver and pancreatic diseases. He is a skilled clinician who focuses on complex pancreatic surgical procedures.

He joined the University of Florida College of Medicine in 2005 as chief of the Division of General Surgery, residency program director and vice chair of the Department of Surgery. He was named interim chair of the department in 2008 and assumed the role permanently in 2009. Prior to that, he was an associate professor of surgery at the University of North Carolina at Chapel Hill.

Dr. Behrns completed a general surgery residency at Mayo Clinic and received his medical degree from Mayo Clinic School of Medicine. A Minnesota native, he received an undergraduate degree from the University of St. Thomas in St. Paul, Minnesota.