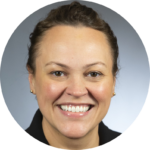 How did you become interested in a medical career?

I can remember sitting in a sixth-grade class learning about the digestive system. My teacher was Mr. Legvold. I decided I wanted to become a physician. I thought it was so engaging. My dad also is a physician, and I am sure I absorbed a lot through osmosis and following him around, asking questions. My father always spoke passionately about the need to take care of people.

You graduated from Meharry Medical College in Nashville, a historically black university. Tell us about that.

Meharry Medical College has made it a priority to serve the underserved. As an undergrad student at New York University, I was fortunate enough to attend medical trips to Tanzania and Mai, where we worked in developing areas with little medical infrastructure. When I researched medical schools, Meharry’s mission for eliminating disparities in health spoke deeply to me.

How did you choose Mayo Clinic for residency?

When I chose to focus on family practice, I wanted to select a program that also was laser-focused on family practice. The La Crosse Family Medicine Residency Program at Mayo Clinic Health System’s La Crosse, Wisconsin, campus stood out because it was unopposed at the hospital — family medicine was not battling other residency programs for position, procedures or space. When I visited, the people were kind and welcoming. It felt like a perfect fit.

After residency, you were a staff physician in a small-town hospital in North Dakota. Tell us about that.

After residency I completed a yearlong international medicine fellowship with Via Christi Health, which is based in Kansas and a hospital in Zimbabwe.

North Dakota has a loan repayment program for serving underserved areas, and a position opened up to work alongside my father in a rural town, Linton. It’s 40 miles from the interstate. The city is the county seat but doesn’t have a streetlight. The population is about 1,000 people. When we talk about people needing quality medical care, Linton is exactly that. If that hospital doesn’t exist, people must drive an hour for care, assuming they have a car and it’s a perfectly sunny day.

That, combined with getting to work alongside my father, was a special opportunity.

Why did you pursue a master’s degree in public health?

I found that I wanted to know more about population health — the root causes of why populations have many of the same problems and why they don’t receive the care they need. I felt like I could learn more about people before they came into emergency rooms. Simply, I felt like the Johns Hopkins Bloomberg School of Public Health program could help me become a better physician.

Why did you decide to run for office?

I never planned to become a politician, but I kept running up against things that needed to be changed. I served in a Syrian refugee camp and also provided medical care in Puerto Rico after Hurricane Maria. Back in the U.S., I talked to patients who couldn’t afford to fill their prescriptions, and I battled with insurance companies to cover needed treatments for those same patients.

I was overwhelmed by the suffering here and abroad and started looking for ways to become involved locally. After the 2017 women’s march, a few friends created an outreach group, and I started volunteering for a state House candidate. It wasn’t until a few months later when that candidate decided not to run that I truly considered running for office. At that point, it seemed like the next natural step.

First, let me be clear: health care is a human right.

Many people have false information about universal health care. Powerful companies keep us mired in the status quo because they lobby the government to keep their interests front and center. If you have to go to the doctor, your first thought shouldn’t be worry that the visit will make you miss a mortgage payment. We need patient-centered solutions, not profit-centered ones.

How do you balance being a legislator and physician?

I don’t know that there is a great balance; it can be a marathon. It’s two full-time jobs — two high-pressure ones at that. It can mean rushing from the legislature from a long committee meeting right to the emergency room for an overnight shift. Luckily, my employer is incredibly supportive.

We all need to make time for what is important to us; helping people as a physician and serving my constituents as a legislator is important to me. My husband and I have three children; although they’re pretty young, he shows them video clips of me from the House floor or brings them to my office from time to time. Sometimes one of my sons will follow me to a meeting. There isn’t really balance as much as your whole family becomes part of the legislature with you.

What’s the value of having physicians in the legislature?

Having physicians in the legislature is important, especially in terms of health care policy discussions. We can speak firsthand about how policies will affect people. Some legislators may have years of experience at the capitol but have never had to call an insurance company to tell them why a patient needs a specific medication or understand why a medication wouldn’t simply be covered by insurance.

What do you want physicians to know about state politics?

Your voices are very important. Physicians are busy and have little time left over to get involved in politics but, without it, medicine suffers and our patients suffer. We’ve allowed non-medical impositions on medicine, which affects patient care and health outcomes. Get involved, come to the state capitol and talk to your representatives — for the sake of your patients.

How was your first legislative session?

We have a lot of work left to do but, as a first time legislator, I was incredibly proud to see a few bills with my signature become law. We passed a bill to license and regulate pharmacy benefits managers to ensure they act in the best interest of patients. We established the Chloe Barnes Rare Diseases Advisory Council, which will be a resource for rare disease patients and their families and a catalyst for translational research. And we secured funding for the tobacco quitline (Minnesota Quitline Network).

When I was working in my clinic before my time in the legislature, I had a patient who could not afford transportation for his medical visits. We secured funding to bring Metro Mobility to Lakeville in this latest session. Making changes like that are the reason I decided to run.

What has been the biggest surprise in your legislative role?

We have a lot of policy arguments that are based on feelings and anecdotes rather than longstanding facts. Some legislators are open to reason; others aren’t. That’s frustrating.

I have a background in data and facts, and it’s discouraging when the debate turns into partisan talking points and playing up to the TV cameras. The floor of the legislature isn’t professional wrestling. We’re elected to help people. That should be job No. 1. It surprises me that it sometimes isn’t.

Mayo Clinic alumnus Matthew Klein, M.D. (MED ’93), also is in the Minnesota legislature — in the Senate.