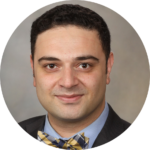 Zaraq Khan, M.B.B.S. (OBG ’11, CTSA ’15, REPR ’15), is a man of many interests. He considered becoming a chef or an electronic dance music (EDM) DJ before deciding on medicine. He played on the national water polo team and swam at the national level in Pakistan. Growing up in Pakistan and London, he came to the U.S. for residency and fellowship. With additional training in Europe, he paved his way in a new specialty in reproductive surgery. He’s one of a handful of U.S. surgeons providing frozen ovarian tissue transplantation for fertility preservation and one of the few reproductive endocrinology and infertility specialists around the world with advanced training in minimally invasive gynecologic surgery, which allows him to treat aggressive fibroid disease and advanced stage endometriosis without sacrificing fertility. He is working on developing a uterus transplant program. Dr. Khan never envisioned himself in the Midwest but says he loves Mayo Clinic’s primary value, focus on teamwork and nice people. “People here do amazing work and are happy.”

“Ultimately, people make the place. Mayo is distinguished by the team approach, collegiality and lack of a stringent hierarchy that is counterproductive for a team. Mayo incorporates nurses, residents, fellows, CRNAs and other team members. Everybody on the team contributes equally to patient care. It’s an amazing learning environment, and one that is even better to practice in.”

I was torn between medical school, culinary school in London or music school in Amsterdam to become a professional “house” music DJ. My decision came down to where would I have job security and where could I contribute the most to society. My father is an infertility specialist, and he has a unique bond with his patients. I was exposed to the impact one  can have on patients’ lives during fertility treatments, and this was always a huge draw for me toward reproductive medicine.

I completed medical school in Pakistan, where the medical training closely aligns with how U.S. students are trained and prepared for boards. When I considered residency and fellowship, there was no question I’d go to the U.S. for training. However, the Midwest was the last place I thought I’d live.

What was your initial impression of Mayo Clinic?

It was a big hospital in the middle of corn fields — an anomaly. It’s a reputable institution with approachable, happy people doing amazing work.

How did you end up at Mayo Clinic?

I wanted to be at a premier institution with excellent academic career opportunities and a solid OB/GYN practice. I wanted to work with people who were genuine and collaborative at a program that was heavy in education and research. Mayo Clinic filled those checkpoints. I didn’t want to be in a smaller city — I’d never lived anywhere smaller than 22 million people. Despite that, there was no question that Mayo was at the top of my list.

Mayo Clinic has a different level and style of education. You’re required to put in time on service, but the emphasis is on the quality of education rather than service responsibilities. Even though delivery numbers for residents at Mayo might be lower than other residency programs, it was the difficult labors, operative deliveries and complex patients with multiple comorbidities, and opportunity to be cutting edge at what you do that attracted me to Mayo Clinic. Ultimately, people make the place. Mayo is distinguished by the team approach, collegiality and lack of a stringent hierarchy that is counterproductive for a team. Mayo incorporates nurses, residents, fellows, CRNAs and other team members. Everybody on the team contributes equally to patient care. It’s an amazing learning environment, and one that is even better to practice in.

What valuable lesson have you learned at Mayo Clinic?

“The needs of the patient come first” is what we live by. If you truly believe in it, you’ll be a good physician no matter where you practice. Additionally, the team approach is the best approach. Communicating with all team members translates into impeccable patient care. Empower team members with information, responsibility and a plan, and they’ll do the best work they can.

What’s your advice for trainees?

Listen to yourself, not the noise around you. Everyone around me except for my close mentors thought I was crazy — that I’d be a forever student who would never graduate. My career path was atypical because I wanted to pursue reproductive surgery. I graduated from medical school at 22 and traveled the world for two years before residency. My training lasted 10 years past medical school — four years of obstetrics residency, a master’s degree in clinical and translational science, four years of reproductive endocrinology and infertility fellowship, and two years of training in minimally invasive gynecologic surgery in Europe. Some called it abnormal; I call it the best training I could have ever had! As a Mayo Clinic Scholar, I learned surgical procedures for reproductive organ transplantation in Denmark and Sweden, and advanced laparoscopy in Switzerland and Germany. To this day, I continue to use surgical tips and tricks learned from brilliant minds across the globe.

If you need an extra two or three years of training for a highly subspecialized area of medicine, don’t be scared. It’ll go by in the blink of an eye but make sure to pursue your true passion.

It’s OK to do something avant-garde or pioneering in an area. Dance to the beat of your own drum. But run it past your mentors first!

Who have been your mentors at Mayo Clinic?

Mentors who have been instrumental in my field of subspecialization have included Elizabeth (Ebbie) Stewart, M.D. (OBG ’07, Division of Reproductive Endocrinology and Infertility); Bobbie Gostout, M.D. (MED ’86, I’ 87, OBG ’91, BIOC ’93, GYNO ’96, Department of Obstetrics and Gynecology, and vice chair of operations, Mayo Clinic Health System); and Abimbola Famuyide, M.B.B.S. (OBG ’02, chair, Department of Obstetrics and Gynecology).

Tell us what you do now.

An example is fibroid treatment. In the past, most women were told they need a hysterectomy to treat aggressive fibroids, which leaves them infertile. We can now treat the most aggressive forms of disease and spare the uterus, preserving fertility. Another example is endometriosis. A woman may have small cysts but have her ovaries removed. We can treat the cysts while saving ovarian function. Additionally, we continue postoperative care for these women and start aggressive fertility treatments right after surgery. For the patient, staying with one physician for both these needs is invaluable. Given the uniqueness of the hybrid practice, we have continued to remain exceedingly busy — a testament to patient satisfaction.

We’re also preserving fertility in children with cancer diagnoses and treatment. In prepubescent girls, this involves freezing ovarian tissue. When these patients are older and in remission, we return the ovarian fragments via surgery and they regain function. We also can do a similar procedure in women who are diagnosed with aggressive cancer that requires immediate treatment. We remove the ovary, strip off its outer layer, freeze the strips and use them even decades later when the patient has recovered.

Fertility preservation in children brings a glimmer of hope to patients and their parents who have received devastating diagnoses. My colleague Asma Chattha, M.B.B.S. (PD ’11, PDE ’14, Division of Pediatric and Adolescent Gynecology), and I spearheaded this project, and we remain one of the busiest programs in the Midwest for fertility preservation in children. My colleague Candace Granberg, M.D. (U ’10), in the Department of Urology, is doing similar work with boys — freezing testicular tissue to preserve fertility.

Finally, I’m continuing my work toward developing a uterus transplant program and remain engaged in basic sciences work in endometriosis. I have funding from the Mayo Clinic Center for Regenerative Medicine to work on a therapeutic animal model for Asherman’s syndrome (a condition with scar tissue in the uterus causing infertility).

What do you do in your spare time?

I like to make house music. My DJ name was DJ Zee. I also am a self-proclaimed mixologist. I make my own tinctures and bitters and carbonate homemade beverages for these cocktails. I’m also an avid cook — mostly Asian fusion and small bites. I like to entertain and cook for large groups. I also love to travel and am on my 105th country.

What would people be surprised to know about you?

When I was younger, I was on the national water polo team and was a national-level swimmer.