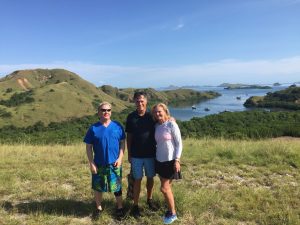 John Jarstad, M.D. (OPH ’88), associate professor of clinical ophthalmology and director of cataract and refractive services at Mason Eye Institute and the University of Missouri School of Medicine in Columbia, Missouri, joined former Massachusetts Governor Mitt Romey and 40 other volunteers for a sight-saving humanitarian trip with Charity Vision to Bali, Indonesia, in April.

Dr. Jarstad was invited to join the trip because of his expertise in ophthalmology and previous involvement with international vision nonprofits.

“Charity Vision asked if I was interested in going since I have visited Indonesia many times, speak Bahasa Indonesian and am also a former U.S. Coast Guard-licensed charter boat captain, which could be helpful in navigating the ships,” says Dr. Jarstad.

The group traveled in two ships and sailed to the islands of Lombok, Sumbawa, Komodo and Flores. Working with local medical staff, they examined more than 750 villagers and performed more than 150 cataract surgeries and six corneal transplants at no charge to the patients. Through community and elementary school vision screenings, they distributed more than 300 pairs of recycled eyeglasses on Lombok, Mojo and Bima Islands. 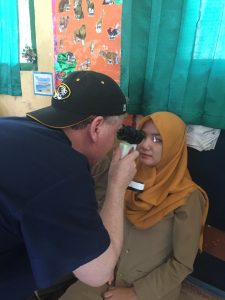 “For most patients, it was the first eye exam and first eyeglasses they had ever received,” says Dr. Jarstad.

He worked with the nonprofit Saving Sight in Columbia, Missouri, to obtain 130 pairs of glasses from the Eyeglass Recycling Program for the trip. The program accepts donations of used glasses, sorts and cleans them, and distributes them to humanitarian groups who bring them abroad to those in need. Last year the program distributed more than 64,000 glasses to people in need with the help of 18 humanitarian groups working throughout North America, Africa and Asia.

“The recycled glasses are a huge help because refractive errors are the second-most common cause of poor vision that is treatable behind cataracts,” says Dr. Jarstad. “All of the glasses donated from Saving Sight found grateful new homes. Thanks to Saving Sight, many people ‘blind’ from refractive errors can now see again.”