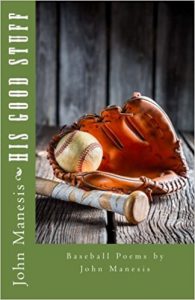 John Manesis, M.D. (R-D ’74), has published “His Good Stuff,” a collection of baseball poems. The book is available on Amazon and includes poems about past and present players, managers, umpires, owners and female baseball players.

Dr. Manesis’ poetry has appeared in more than 90 literary publications, including several anthologies.This is his fifth published poetry book.

Dr. Manesis and his wife live in Fargo, North Dakota, and spend winters in California. Dr. Manesis was a diagnostic radiologist at the Fargo Clinic, now part of Sanford Hospitals, from 1974 until he retired in 1996. He has been writing poetry for 30 years, much of it related to his medical experiences and Greek-American heritage. He has given 15 public readings from his poetry books in locations including Wisconsin, California, North Dakota and Arizona.