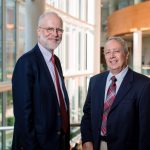 ‘Bit by bit, we recognize that we’re all in the same huge family.’

James Haemmerle, M.D. (OR ’78), thought about donating a kidney for years. Not for a specific recipient but, rather, an altruistic donation — for anyone who needed it.

“I knew there were limited kidneys available but many people needing them,” he says. “The alternative is dialysis, which isn’t a great way to live. I was at the stage of my work life where I could take time off to recuperate after kidney donation without disrupting the practice. I had two normal kidneys and no expectation that I’d need both of them. It seemed like the right thing to do at the right time.”

Dr. Haemmerle, now retired from 36 years of orthopedic surgery practice at Mayo Clinic Health System – Red Cedar in Menomonie, Wisconsin, had surgery to remove his left kidney at Mayo Clinic in Rochester in 2010. He spent two nights in the hospital and was back to work part time in six weeks.

“The recovery was what I anticipated,” he says. “I was off of pain medication in a few days and uncomfortable for only a week or so. When I had discomfort in the first few days after my surgery, I thought about what it’s like to live every day with kidney failure.”

About a year later Dr. Haemmerle met the recipient of his kidney, who lives in northern Minnesota with his wife and four children. “We met for lunch and had an easy conversation,” says Dr. Haemmerle. “He’d had an infection that wiped out both of his kidneys at the same time and had just started dialysis when he was notified about the availability of a kidney. He and his family were very grateful. We attended his twin daughters’ high school graduation party and now keep in touch with holiday cards. Our wives keep in touch on Facebook.” 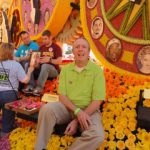 James Haemmerle, M.D., on the Donate Life float in the Rose Bowl parade

Dr. Haemmerle says he thinks of kidney donation as an act you’d do for another person who needs help. “If someone were in an accident on the side of the road, you’d pull over and help. It’s the same basic concept. I just don’t think it’s on most people’s radar to donate. While it requires an operation with general anesthesia, the risks are extremely low. And you’re thoroughly tested beforehand to make sure you’re in excellent health and able to donate. Most people think differently about what they’d do for a family member versus what they’d do for a stranger.

“Bit by bit, perhaps we as a society are coming to recognize that we’re all in the same huge family. When you think about it that way, it becomes a more reasonable, logical thing to do.” 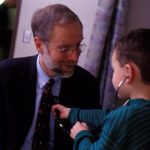 ‘If our lives have bigger, broader meaning beyond ourselves, donating a kidney could be a pretty normal thing to do.’

Philip Fischer, M.D. (PD ’99), Department of Pediatric and Adolescent Medicine at Mayo Clinic in Rochester, donated a kidney altruistically in 2011 after thinking about it for a few months.

After rounds on a patient waiting for a kidney transplant, some medical students joked about donating a kidney to get a better grade on their pediatric rotation. The situation gave Dr. Fischer pause. Was it such a crazy idea to donate for a stranger? Why don’t more physicians donate kidneys?

Today he says he still can’t put his finger on his motivation. “Many people donate blood to help others and think little of it. Donating a kidney requires a bigger amount of time. It’s a question of how much do you want to give of yourself. What are we really here for? Just to do things for ourselves and be comfortable? If our lives have bigger, broader meaning beyond ourselves, donating a kidney should be a pretty normal thing to do.”

Like Dr. Haemmerle, it took Dr. Fischer about six weeks to feel back to normal after donating his left kidney. “I was in the hospital for one night and didn’t have any pain afterward.  I just felt drained of energy. I used vacation time to recover.”

Dr. Fischer didn’t meet the recipient of his kidney, but she sent a thank you note. He knows she’s a grandmother who is grateful for the kidney, which will allow her to have more time with her grandchildren.

Dr. Fischer says he doesn’t like to preach about organ donation. Six years after he donated a kidney, however, he wants to ask others to consider making a similar gift.

“My friend Max has kidney failure,” says Dr. Fischer. “He recently retired after a career as a college teacher. In his free time, he’s an expert woodworker. Today, though, the saws in his shop are silent. His kidneys are functioning at only 18 percent of normal level, and he doesn’t have the energy to do much.

“Max is on the kidney transplant list. If I had a spare, I’d offer it to him. Even if mine wasn’t a match for him, my donation on his behalf could start a chain that would lead to a kidney for Max. I hope someone can give a kidney for Max.”