Two Mayo Clinic researchers earned de Leon Prizes in Neuroimaging at the Alzheimer’s Imaging Consortium. The awards are presented annually to those who are judged to have published the best paper in their peer group in any peer-reviewed journal on the topic of advanced medical imaging to show diseases that affect or destroy nerve cells in the brains of people with diseases such as Alzheimer’s, Parkinson’s and ALS.

The 2018 Senior Scientist de Leon Prize was awarded to Kejal Kantarci, M.D. (R-D 04, CTSA ’09), Division of Neuroradiology, Department of Radiology, Mayo Clinic, and professor of radiology. The paper for which she was recognized is “White Matter Integrity on DTI and the Pathologic Staging of Alzheimer’s Disease,” published in Neurobiology of Aging in August 2017. Dr. Kantarci’s research focuses on using advanced brain imaging technology for early diagnosis of dementia in patients. 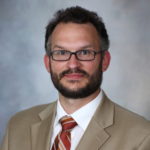 The 2018 New Investigator de Leon Prize was awarded to David T. Jones, M.D. (N ’11, CI ’13, NBN ’14), Division of Behavioral Neurology, Department of Neurology, Mayo Clinic, and assistant professor of neurology and radiology. The paper for which he was recognized is “Tau, Amyloid, and Cascading Network Failure Across the Alzheimer’s Disease Spectrum,” published in Cortex in December 2017. Dr. Jones’ research focuses on developing methods to derive measurements of brain connectivity and to evaluate their potential as biomarkers in healthy aging and diseases such as Alzheimer’s and other dementias.