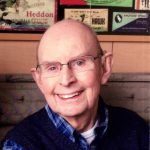 Upon retiring from Carle Clinic in Urbana, IL, in 1985, Dr. Thow joined the Colon and Rectal Surgery Associates, P.A. practice in Chattanooga, TN. Later, he joined the University Surgical Associates of Chattanooga, TN.  It is there that he and his wife were members of First Presbyterian Church, where he enjoyed singing in the choir.  He could often be found on the tennis courts with his men’s club, and his grandchildren.

In 2004, he retired once again, to Bend, OR, to be near family and cherished his time with his children and grandchildren.  A highlight of his week was the Community Bible Study which he attended for many years.

We will miss his kind, generous and caring spirit, but are comforted by knowing that he is now home in the presence of his Lord and Savior.

Memorial contributions in Dr. Thow’s memory may be made to Shepherd’s House – www.shepherdshouseministries.org/donate or to Bethlehem Inn – www.bethleheminn.org.

Deschutes Memorial Chapel and Gardens is honored to serve the family (541) 382-5592. Visit our online register book to send condolences and share treasured memories at deschutesmemorialchapel.com or on Facebook at facebook.com/deschutesmemorial.