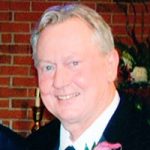 Dr. George Lincoln Osland age 73 of Minneapolis passed away on March 20, 2017. George passed away Monday morning peacefully with his wife Heather, whom he loved dearly, at his side and with his children near him. He died of complications stemming from numerous heart, pulmonary illnesses and cancer. Similar to how he lived his life, he died quietly but affected those around him immeasurably.
Born February 12, 1944, he grew up on the family farm in Mayville, N.D. Even though he pretended not to know a lot, he graduated from Hillcrest Academy, the University of North Dakota. the University of Minnesota Medical School, spent 2 years in the Navy, and completed a 4 year residency at the Mayo Clinic. He joined Northwest Orthopedics in Robbinsdale, MN in 1977 where he practiced as an orthopedic surgeon for 20 years. George loved his children, John Deere tractors, Birkenstocks, harmonizing, welding, and golf – not necessarily in that order, and he especially liked playing the organ.
He is preceded in death by his parents George and Nora and his brother Gary. He is survived by his wife Heather and her children Eli and Ashley as well as his children Ethan (Nativida), Jason, Aaron (Terri), Sarah (Mark) McCulloch Martha (Greg) Johnson, and 6 grandchildren Anton, Oliver, Arvid, Evelyn, Nora and Clare; sisters Jane (Donald) Foss and Genelle (Marvin) Blomquist. His patient, kind spirit made him an extraordinary man and he will be remembered fondly by all that knew him.
A Memorial service will be held at 1 PM on Saturday, March 25th at St. John the Evangalist Episcopal Church, 60 Kent St. in St. Paul, MN. In lieu of flowers, please send donations to Shriners Children’s Hospital where George volunteered his skills and enthusiasm on a regular basis. Gill Brothers 612-861-6088 gillbrothers.com.
Originally published in the Star Tribune.