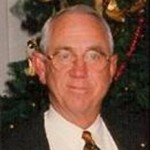 Albert Dale Gulledge, M.D. was born in Lubbock, Texas on May 30, 1932 to Albert and Hazel Gulledge. Dale grew up moving frequently around the Midwest, as his father was a store manager “troubleshooter.” In some ways, he followed his father, only he focused on people with troubled lives.
He started playing baseball at a young age and would spend hours practicing throwing against a wall and catching, if he had no other player. His interest in becoming a doctor resulted from serving as a medical corpsman in the U.S. Air Force. While working on a B.S. at the University of Kansas, he also played on the baseball team, until he suffered a shoulder injury. A rain delay on a baseball trip to Houston gave him a chance to visit Baylor University College of Medicine and he decided to go there. He earned a M.S. and an M.D., graduating with honors. After an internship at the University of Minnesota, he became a Fellow in Internal Medicine at the Mayo Graduate School, thinking he would become a cardiologist. However, he became interested in the effects of illness on the mind and spirit, and switched to training in psychiatry.
He became the first psychiatrist at the Wichita Clinic and also began teaching Family Practice residents how to take care of the emotional needs of their patients. From then on, he was always a teacher. Invited to the staff of the Mayo Clinic, he worked with Mayo cardiologists to start their first cardiac rehabilitation program.
In 1974, the University of South Dakota’s School of Medicine was expanding to a four year school that focused on family medicine. The dean had heard Dale teaching Family Practice residents in Wichita and recruited him to become the first Chairman of the Department of Psychiatry.
Next, he was recruited to the Cleveland Clinic to develop a new consultation service to help people with chronic, critical and terminal illnesses. One section of the Liaison Psychiatry Service still bears his name. He also was the first chairman of the ethics committee. He was president of the Academy of Psychosomatic Medicine and a board examiner for the American Board of Psychiatry and Neurology. He was elected to the American College of Psychiatry. He wrote and edited books, authored and co-authored many articles and was a popular and frequent speaker. When Cleveland Clinic opened in Ft. Lauderdale, FL, Dale became chairman of the Department of Psychiatry there. Because of his interest in educating family doctors, he was elected to serve on the American Board of Family Medicine’s Board of Directors. That was a true labor of love!
After “semi-retirement,” he moved to Boise and joined his good friend, Dr. Terry Gipson, in private practice. He then became Director of Outpatient Psychiatry at St. Alphonsus Medical Center and continued to teach Family Practice residents in the Idaho Program. In 1998, he fully retired to pursue his passion for golf. He continues to receive letters from patients, one recently from someone who was his patient 40 years ago, thanking him for his help. One of the nurses recently wrote, “Dale remains forever the kindest and most gentle man that I have ever known. A superb and humble doctor, who was brilliant and accomplished so much throughout his career.” He was asked last year what he had done for his working years and he replied, “I took care of people.” Yes, he did!
Dale is survived by his wife of 58 years, Patricia Gulledge; sons, David Dale (Anne) and Robert Brett (Anita) Gulledge; and grandchildren Brandon, William, Avanta and Ashvin Gulledge; and his sister, Anita Dyer (Don) and their children, grandchildren and great grandchildren. Family would like to thank Dr. Laurie Ashby for being a true “Doctor’s Doctor!” And, to the caregivers and entire staff at Edgewood Spring Creek Ustick, our unending admiration and gratitude!
In lieu of sending flowers, please consider a donation to The Michael J. Fox Foundation for Parkinson’s Research (https://www.michaeljfox.org).
An open house will be held from 6:00-8:00 PM on Thursday, January 7, 2016 at Accent Funeral Home, 1303 N. Main St., Meridian. Remembrances may be left for the family at www.AccentFuneral.com. Services are under the direction of Accent Funeral Home.