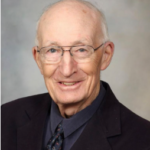 Alan was born on August 31, 1931 in Dundee, Scotland to Olive and David Cameron. He lived in York, England, with his parents and sister. At age 13 he was sent to boarding high school Marlborough College in Wiltshire, England.

He spent two years, 1950 -1951, in military service as a lieutenant in the Royal Army: Royal Artillery, anti-aircraft.

Alan went on to medical school at Middlesex Hospital in London. He graduated with M.B. B.Chir. Degrees in 1958. After his general physician training, Alan trained and became a specialist in gastroenterology (GI). An opportunity to further his GI specialty at Mayo Clinic brought him to Rochester, Minnesota in the United States in 1966. He became a Mayo Clinic Staff Consultant in Internal Medicine and Gastroenterology in 1968.

Alan had a distinguished career, specializing in esophageal diseases, and started the esophageal subspecialty clinic at Mayo. He became Professor of Medicine in 1996 and was given Mayo’s Henry S. Plummer Distinguished Achievement Award in 1997. Also in 1997, Alan received the Distinguished Clinician Award from the American Gastroenterological Association.

One of his career highlights lives on now: In 1986 he described linear gastric erosions in patients with large hiatus hernias. The lesions are known as “Cameron Lesions” – or alternatively as “Cameron Ulcers.”

His wife Mary Jane passed away on January 11, 2022, aged 86. He is survived by his son, Douglas (Carrie) and grandsons Nicholas and Rhett of White Bear Lake, Minnesota; daughter, Kathryn of Rochester; sister Barbara of Beverley, England; nephews Hugh of Brisbane, Australia, and Charles of London, England.