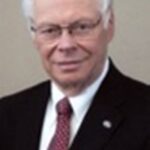 In recent months Alan was assembling his memoirs, portions of which are included below.
“A succession of good fortune has befallen me over the years, for which I am extremely grateful.” He always felt he had been “darned lucky.” An only child, Alan was born on April 4, 1932, in the Jamaica Plain neighborhood of Boston, MA, to Albert (a dentist) and Mildred (a doting mother who Alan credits for getting him off to an acceptable start in school).

Alan believed in the value of education and admired educational institutions that have endured for centuries. The seed for this was planted by his study at Boston Latin School, established in 1635 as the first public school in the United States. Boston Latin was tough. He recalls, my years there made me a believer in meritocracy. Your nationality and social standing didn’t matter; if you didn’t cut it, they threw you out.

From 1939 to 1955, he spent entire summers visiting and working at picturesque Pinewood Camps in Canton, ME. His social skills, work ethic, appreciation of nature and the outdoors, and love for family was developed during those years. Alan attended Dartmouth College, Tufts University Medical School, and in 1957, began internship and residency at the Dartmouth-Hitchcock Medical Center in Lebanon, NH. He would later continue his support of DHMC traveling to New Hampshire twice a year for 23 years as a member of the board of trustees or in an advisory role.

During his residency, he met Martha Anne Smith, an intern who had completed medical school at The University of Texas Medical Branch in Galveston. They were married on July 4, 1959, in La Marque, TX. Over the next seven years, they would become proud parents of three children: Karen, Steve, and Jim.

In August 1959, he was activated in the U.S. Navy and assigned to the Naval Hospital in Great Lakes, IL, as an anesthesiologist. In November 1960, he was re-assigned as the Medical Officer aboard the USS Des Moines. Since there was no active combat at the time, his 9-month tour on the Mediterranean was reasonably pleasant and educational.
In 1961, Alan began a fellowship at Mayo Clinic in Rochester, and, in 1962, he was appointed to Mayo Clinic Staff as a consultant in anesthesiology, serving there until his retirement in 1995. He became an advocate for the underdog–the status of anesthesia in the early 1960s. He helped to establish the first ICUs at Methodist and Saint Marys hospitals in the late 1960s and directed the units at Saint Marys through the 1970s. Never happier than when planning with friends and associates, the moves required to accomplish a goal; he had a talent for persuading the right people to do things that needed to be done. He was vigorous and persistent in enabling each project to achieve a favorable outcome.

Alan was especially committed to medical education. As chair of the Department of Anesthesiology from 1977 to 1988, he led the anesthesiology residency program in its rapid growth, sending dozens of finely educated anesthesiologists into practice throughout the United States and world. From 1989 to 1995, he was Dean of Mayo School of Graduate Medical Education.

Despite the long hours required by his many work responsibilities, he could also leave his work at the office. The family has fond memories of summer vacations to Maine and northern Minnesota, walks that doubled as mentoring sessions, and his supportive attendance at activities ranging from Little League games to school band concerts.
After retiring from Mayo and with the children off on their own, he and Martha often traveled, taking over 20 trips with the Road Scholars program. Birds in South America, beaches and volcanos in Hawaii, an African safari, ancient ruins in Mexico, and more – all interesting and offering something new to learn and experience. Closer to home, Alan continued to receive reports, announcements, and invitations from a multitude of medically related organizations in which he had enjoyed a leadership role. Frequent cup of coffee visits with active colleagues brought pleasure as he learned of changes in their lives and the life of the anesthesia department.

Many organizations that Alan perceived to be good for the community and the betterment of individuals within them have benefited from his time and talents. Notable recently are the Rochester Public Library with its educational opportunities and Charter House with friends both new and old and the activities of its committees — whose meetings Alan often attended even when not an official member.

To leave a special memory or condolence, please visit www.ranfranzandvinefh.com.