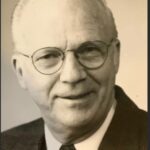 With profound sadness, the Sather family announces the passing of Dr. Alfred Sather, May 20, 2022, our loving and devoted father, grandfather, and friend to all whose lives he touched.

Howard was born in Aitkin, MN, attending school in McGregor, MN, where he spent his youth helping at the family general store. He received both his dental and orthodontic education at the University of Minnesota, graduating in 1959. That year he joined the Mayo Clinic and initiated the Orthodontic Graduate Program and served as program chairman for 20 years. He served as professor in the Mayo Graduate School of Medicine, devoting a major share of his efforts to teach, guide research, and mentor men and women.  He was awarded many awards in his outstanding career at Mayo Clinic.

Howard married Mary Lou Olson in 1955 and they reared one daughter, Barbara Portinga; and two sons, Paul and Dave Sather.  They divorced in 1990.  In 1991 he married Ann Bratton who brought two children to the family, Lisa Andringa and Doug Bratton.

Howard was preceded in death by his parents and brother, Paul.  He is survived by his wife, Ann; sons Paul (Judy), Dave (Gloria), Doug Bratton; daughters Barb Portinga (Brian), Lisa Andringa (Bob); 9 grandchildren and 5 great-grandchildren.  Although a giant in the orthodontic world, he was a kind, gentle, humble man.

A Celebration of Life was held at the Colonnade in AZ where he and Ann lived.  Funeral services will be held at Grace Lutheran Church, McGregor, MN, on July 9.  Visitation is at 1:00 and services at 2:00.  Memorials can be sent to the Innovation in Orthodontics fund at the University of Minnesota.