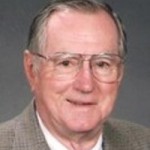 Funeral Services are 3:00 PM Sunday, April 17, 2016 at First English Lutheran Church, Wisconsin Rapids, WI. Rev. Cheryl Davis will officiate. Visitation will be at First English Lutheran Church on Sunday from 1:00-3:00 PM. Entombment will be in Forest Hill Mausoleum. Ritchay Funeral Home in Wisconsin Rapids, WI is assisting the family (condolences can be sent to ritchayfuneralhome.com).

Allen graduated from the University of Wisconsin-Madison in 1950 where he also was a member of the Alpha Omega Alpha Medical Honor Society. He performed an ophthalmology residency training at the Mayo Clinic. Allen owned and operated his own medical practice in Wisconsin Rapids for 33 years retiring in 1991.

Allen served in the U.S. Navy during World War II from December 7, 1943 until January 12, 1945. He was a member of the Kiwanis Club. Allen enjoyed reading, gardening, birdwatching and travel. He and his wife, JoAnn traveled extensively including several trips to Asia and Europe, as well as South America and Antarctica.

Allen was preceded in death by his parents and brother, John Wittchow.

Memorials can be designated to Martin Luther College (please make designation to the Allen and JoAnn Wittchow Scholarship Fund) at 1995 Luther Court in New Ulm, MN 56073 or to the Alzheimer’s Association

“Allen’s Christian faith and Lutheran upbringing were important to him. In 2011, Allen and his wife, JoAnn established a scholarship fund at Martin Luther College in New Ulm, MN.”