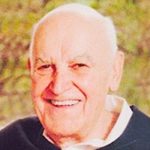 Spraitz, Anton Francis, Jr. “Dr. Tony” Anton Francis Spraitz, Jr., age 87, passed away peacefully on September 16, 2018. Dr. Tony was born on May 14, 1931 in Chisholm to Anton and Mary (Hrovat) Spraitz. A lifelong resident of Minnesota, Dr. Tony was raised in South St. Paul and resided in Rochester, Roseville, and, for over 47 years, North Oaks. He was a beloved and loyal member of all communities of which he was a part. Dr. Tony was a graduate of South St. Paul High School, class of 1949 as well as the University of Minnesota. He received his BS, BA in 1953 and his MD in 1957. He was an Ob-Gyn Fellow at the Mayo Clinic until 1963. Dr. Tony delivered upwards of 7,000 of Minnesota’s infants in his career as a physician. He also served as a Captain in the US Army from 1958-59 in Korea where he was a member of the Korean Military Advisory Group. Dr. Tony co-founded St. Paul Ob-Gyn in 1963 and later served as President of the St. Paul Surgical Society and Chief of Staff at Midway Hospital. Dr. Tony and his classmate Jerry Scherek were among the first doctors advocating to allow fathers in the delivery room. Dr. Tony believed his greatest honor and privilege was being with so many as they welcomed new family members into the world. He was a lifelong athlete; he enjoyed football, bird hunting, tennis, squash, and racquetball. He was an avid fan of all Minnesota sports, especially the Vikings. In his retirement years he discovered a passion for thoroughbred horse racing. Above all, Tony was an extraordinary husband, father and grandfather. He married his wife of 62 years, Pat, on September 15, 1956. Their daughters, Cindy and Kathy, were born in 1959 and 1962, respectively. He had a great sense of humor, was steady, loyal and ever generous, and will be greatly missed by his family. Tony is survived by his wife, Patricia (Hogan) Spraitz; children, Cindy Spraitz and Kathleen (Michael Swanson) Spraitz; grandchildren, William and Erika Swanson; nephews, Douglas and Keith (Janet) Anderson, and niece, Marissa (Daniel) Quarberg; his colleague of many years, Dr. Michael Spence; along with many other friends, neighbors and trusted colleagues. Tony is preceded in death by his parents, Anton and Mary (Hrovat) Spraitz, Sr.; his sisters, Harriet (George) Genereux and Vera (Warren) Anderson; and his brother-in-law, George (Lois) Hogan. Dr. Tony never forgot his roots or Croatian heritage and always felt gratitude toward his hard-working immigrant parents, Papa Tony and Mama Mary. A visitation will take place on Thursday, September 27, 2018 from 4:00 PM to 6:00 PM at O’Halloran Murphy Funeral Home. A Celebration of Life for Dr. Tony will take place the following day, Friday, September 28, 2018 at 10:30 am at Waverly Gardens Chapel, 5919 Centerville Road, North Oaks, MN 55127, with a luncheon to follow. In lieu of flowers, memorials are preferred to Courage Kenny Foundation or the Mayo Foundation.