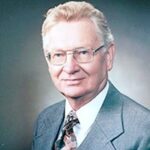 Anderson, Dr. Arnold (Arne) S., Jr. Arnold S. Anderson, Jr., age 99, of Minneapolis died peacefully at home on May 8, 2017, surrounded by his children, grandchildren, and great grandchildren. Arne is survived by his sons, Renner (Martha), Jeffrey (Martha), Kimball (Margaret), Whitney (Susan), Colin (Kittie), and daughters, Lucinda (Roy, deceased), Susanna Erickson (Doug), Amy (Garrett, significant other), Martha (Dave), 17 grandchildren, eight great grandchildren, and brother Pat ( Sally). Preceded in death by his beloved wife, Rusk, to whom he’d been married 73 years; his parents, Arnold, Sr., and Myrtle; his sister, Mary; and his son, Tyler. Arne will be remembered for his warmth; his sense of humor; and the way he affected all the lives he encountered, from close family members to those across the globe. He was well loved by his family as he loved them all. They will continue to share his life through memories. Arne grew up in Minneapolis and graduated from West High School in 1935. He then attended St. Olaf College in Northfield, MN where he graduated in 1939 with majors in chemistry and business. Arne met Rusk at St. Olaf and they were married on August 31, 1940. He attended the University of Minnesota’s Medical School and earned his medical degree in 1943. He completed his internship at San Diego County Hospital in San Diego, California and shortly thereafter was drafted into the U.S. Army. Arne was stationed in England and Germany at the conclusion of World War II, caring for soldiers and displaced war refugees. He was discharged as a captain in 1947 and completed his pediatric fellowship at the Mayo Clinic in Rochester, MN and earned his Masters of Pediatrics from the University of Minnesota in 1950. In 1950, Arne and 10 young physician friends pooled their veteran’s benefits to start the Saint Louis Park Medical Center that has since evolved into Park Nicollet Medical Center. Arne served as the clinic’s early CEO and President of the Board of Trustees, and later founded the clinic’s Foundation for Research and Education. In 1967 Arne took leave from the clinic to establish Minneapolis’ Teenage Medical Service (TAMS) and found Children’s Health Center on Chicago Avenue in Minneapolis, which since has become part of Children’s Minnesota. He worked tirelessly to raise the money and recruit the staff for Children’s; the new hospital facility opened its doors in 1973. He was the hospital’s first CEO and Chief Medical Director, and later served as the director of patient care. When not seeing patients in Minneapolis, Arne and Rusk traveled around the world for months on end, providing care to families and serving as the President for Minnesota International Health Volunteers, representing that organization in Kenya where they helped build schools and establish medical services. Arne was a continuing advocate for children from all walks of life and held key positions with the American Academy of Pediatrics, writing and speaking on early childhood development, nutrition, and adoption of disadvantaged children, while continuing to provide pediatric care in Minneapolis and teaching medical students as a clinical professor for the University of Minnesota Medical School. In recognition for his life-long contribution to children and public service, Arne received the Charles Bolles Bolles-Rogers Award from the Twin Cities Medical Society in 1978, the Distinguished Alumni Award from St. Olaf College in 1979, the Gold-Headed Cane Award from the University of Minnesota Medical School’s Department of Pediatrics in 1990, The Outstanding Achievement Award from the Board of Regents for the University of Minnesota in 1993, and the Mayo Clinic’s Distinguished Alumni Award in 1997. Arne “retired” in his mid-80s, but continued to work part-time as a pediatrician at Minneapolis’ Pilot City Heath Clinic, now NorthPoint Health and Wellness Center. Arne always enjoyed the outdoors, whether it was camping, canoeing or fishing. One of his special interests was the Boy Scouts of America. He appreciated Boy Scout values and established the medical facility at Many Point Scout Reservation, north of Park Rapids, MN. For years he took his family to Many Point to spend his summer vacation as a camp physician and recruited his colleagues from Park Nicollet to do the same. For his contribution to Many Point and the Boy Scouts of America, Arne was awarded the Silver Beaver, the Boy Scouts’ highest award for service to the organization. Arne and Rusk had friends from all over the United States and around the globe. Their home was often a “home away from home” for traveling missionaries, exchange medical students, foreign medical providers, and immigrant families. Throughout his life, Arne continued to write and speak on child health while finding time to tend his large vegetable garden and fruit trees, care for his honey bees, and continuously corresponding with friends and medical colleagues through his long, hand-written letters. Arne cherished time with his family and into his 90s looked forward to vacationing on Lake of the Woods with Rusk, children, and grandchildren. The family extends its appreciation to Park Nicollet Hospice and the Comfort Keepers staff, for providing the comfort and care that allowed Arne to spend his final days at home. Arne and Rusk were members of the Minneapolis Friends Meeting. A memorial service will be held on Sunday, May 21, at 3 p.m. at Hennepin Avenue United Methodist Church, 511 Groveland Avenue, Minneapolis, MN. Interment is private. Memorials are preferred to the Park Nicollet Foundation and Children’s Minnesota.