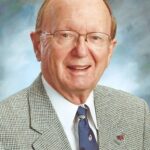 Bennie James Clayburgh was born in Scobey, Mont., on Jan. 31, 1924, the son of Anna (Horvick) and Marcus Clayburgh. Ben liked to say “once a Montanan, always a Montanan,” but he considered Grand Forks his home town. He attended South Junior High and graduated from Central High School in 1941. Ben passed away on Jan. 21, 2013, 10 days short of his 89th birthday. Ben married his college sweetheart, Mina Tennison, on June 23, 1947. She passed away in 1968. On Jan. 3, 1970, Ben married Beverly Manternach in Moorhead, Minn.

Ben enlisted as a private in the U.S. Army in 1942. Following basic training, he was assigned to Service Command Unit 3772, University of North Dakota, where he took pre-med courses; Washington Jefferson College, Washington, Pa., for nine months; and performed general duties in the neuro-psychiatric section of Fitzsimmons General Hospital in Denver, Colo., for a period of four months. He was then transferred back to UND, where he was a student in medicine for 15 months. Recalled by the military in 1950 during the Korean conflict, Ben was stationed at Ellsworth Air Force Base in South Dakota and at a base in London serving as a flight surgeon, retiring from the Air Force in June 1953.

Following military service, Ben began his orthopedic surgery residency at the Mayo Clinic in Rochester, Minn. After completion of his residency in 1956, Ben moved his family back home to Grand Forks, where he spent the next 10 years practicing at the Grand Forks Clinic. In 1966, Ben and Dr. John McLeod formed The Orthopaedic Clinic. Ben was certified by the American Board of Orthopedic Surgery and served as a Councilor for North Dakota to the American Academy of Orthopedic Surgery for six years. Ben was a clinical professor in surgery at the UND School of Medicine. He was an active member of many professional organizations throughout his career. He served as president of both the Third District Medical Association, as well as the North Dakota Medical Association in 1994, the same year his son, John, was chair of the North Dakota Dental Association. In the mid-1980’s, Ben and a half dozen other Midwest orthopedists founded the Mid-American Orthopedic Association, an organization encompassing all states in the middle part of our country. Ben served as secretary of this group for four years and in 1988 was the group’s president.

In 1988, Ben, and three other orthopedic surgeons from around the country, were invited by the Chinese government to come to China to lecture their military doctors on spine surgery. In 1991, Ben and Bev spent several weeks in Malawi, a country in Central Africa, where he operated and taught basic surgical techniques to that country’s medical students. Ben loved his profession and combined his love of travel with the passion of sharing his knowledge with those in developing countries.

Since the mid-1960’s, Ben was active politically on the local, state and national level. He served 12 years as North Dakota’s Republican National Committeeman. He was honored to be chosen an elector in 2004 casting North Dakota’s vote for President George W. Bush. Ben was recognized as the 2008 Republican Volunteer of the Year and his picture hangs in the Hall of Fame at the Ronald Reagan Republican Party office in Bismarck. He retired from his busy surgical practice in 1994 in order to devote full time to his campaign for a seat in the U.S. Senate. Following his defeat in that election, Ben established OIME INC. (Orthopedic Independent Medical Evaluations, P.C.), which he managed for the next several years doing independent medical evaluations and spine consultations. Following his retirement from OIME, Ben became active with the UND School of Medicine and Health Sciences (he was given the title “International Ambassador for Medicine”) focusing on arranging medical student exchanges between UND and medical schools in Trondheim and Tromsoe, Norway, making many trips to Norway as that program developed. At the time his health began to decline, he was working on a new medical student exchange between UND’s InMed students and Norway’s native Sami students. Ben also was one of the founders of the local Nordic Initiative, a group comprised of representatives of all five Scandinavian countries interested in preservation of their heritage.

Ben was a devoted Sioux fan and a number of years ago determined that his University should have a marching band. He gathered together a number of other devoted Sioux fans and together, they began an intense fundraising campaign to outfit a band of 100 student musicians with snappy uniforms, some instruments and a vehicle in which to transport them. Ben was particularly fond of the band’s young director, Robert Brooks, and tried to make it his business to see that Robert would be well compensated and have whatever he needed to put together a band we would all be proud of. Ben watched with great pride and a sense of ownership as “his band” played and marched at athletic events.

Ben was preceded in death by his parents; his wife, Mina; his sister, Donna (Stanley) Voak; his brother, Mark (Margaret) Clayburgh; and one grandson, Mark Jacob Clayburgh.

In lieu of flowers, memorials may be made to the Pride of the North UND Marching Band, the United Lutheran Choir, or a charity of your choice.