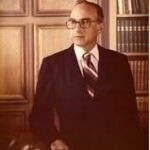 Boca Raton, Florida – Bernard “Bob” Francis Rice was born in St. Augustine, Florida, on June 15, 1931 and died at home in Boca Raton on June 15, 2021 at the age of 90. He was the eldest son of Harry Rice and Rose Nussbaum Rice, both immigrants from Ternopol, Poland and environs (now Ukraine). Bob graduated in 1949 from Ketterlinus (now St Augustine) High School where he was a good student and was a proud member of the 1949 Yellowjackets football team (defensive tackle) that won the Florida All-Conference East Coast Championship in 1949. He received his BA from Temple University and his MD from Temple University Medical School where he also completed his internship. He completed his residency at the Mayo Clinic in Minnesota and received a MS in Medicine from the University of Minnesota after 3 ½ years. Between 1960-62 Bob fulfilled his military service at the Mountain Home Air Force Base in Idaho with the rank of Captain. Bob’s 2-year post-doctoral fellowship at the University of Miami under Kenneth Sevard, DSc stimulated his interest in endocrine research.
He continued his endocrine research at the Ochsner Foundation in New Orleans for 12 years. In 1976 he joined the UMKC Medical School in Kansas City, MO as a docent/research professor where he was appointed Chief of Endocrinology. After nearly five years he opened a private practice in Shawnee Mission, KS specializing in Endocrinology and Metabolism. His office was open for 30+ years. His wife Joan, office manager Loren, and Marie Speas, RN were invaluable in making the practice a success.

Bob’s passion for basic research motivated his career for 60+ years. Absent the research experience Bob would have been a less successful clinician. Though Bob’s research resulted in 80+ peer reviewed publications and invitations to many international meetings, his greatest satisfaction came from applying the latest research findings to help diagnose and treat patients. Bob’s understanding of the aging ovary led to insights that helped him treat patients with severe menopause symptoms allowing these individuals to resume normal lives and saving many relationships. His deep understanding of the endocrine system and its effects on human physiology and behavior and his desire to educate patients about their diseases and treatments endeared him to his patients. He was a Fellow of The American College of Physicians and a Member of The Endocrine Society and many other scholarly societies and organizations that supported research in medicine and human physiology. He was a regular attendee at The Laurentian Hormone Conference in Mont Tremblant where he greatly enjoyed discussing the latest discoveries and advances in Endocrinology.

Bob was an avid squash player and enjoyed his regular poker games and the camaraderie of his friends. Other favorite activities included reading Jewish history, managing his personal investments, and just soaking up knowledge from all sources. He was a multi-tasker extraordinaire.

After retiring, Bob and Joan lived part-time in Prairie Village, KS, and part-time in St. Augustine, FL for 7 years before moving to Boca Raton in 2018.

Bob was buried in St. Augustine, FL in the Sons of Israel Cemetery near his parents, Harry and Rose Rice, on June 17, 2021. His brother, Fredrick Rice, pre-deceased him.
He is survived by his loving wife of 67 years, Joan Feinsilver Rice, sons, Matthew (Loren), Jonathan (Victoria), Adam, and grandchildren, David (Ainee), and Gabrielle.

The family thanks Clairvoyant Francois and Audrey McKenzie for the care they gave to Bob in Boca Raton. Also, a special thank you to Dr. Richard A. Levine for handling the many phone calls regarding Bob’s health with kindness and patience.