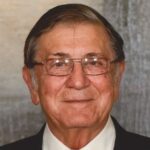 DR. BURTON MALLETT ONOFRIO, aged 89, has passed away from complications of a stroke on December 8, 2022 at Methodist Hospital in Rochester, MN, loved ones at his side.

Born January 1, 1933, in New Milford, CT, Burton was raised in Norwalk, CT, palling around with his favorite cousin Danny and developing a strong work ethic working for his father, a butcher at a local meat market, after school. That work ethic led him to aim high with his education, graduating cum laude from Dartmouth College in 1954 and earning a Medical Doctorate from Cornell University in 1957, after which he served an internship and two years of general surgery at New York Hospital Medical Center. To pay for his education, Burton enrolled in the United States Navy, where, while stationed in Sasebo, Japan, he met the admiral’s daughter, Judith Keith Tyree. The courtship lasted only two weeks before he proposed, and the two married in the spring of 1960.

Shortly after the wedding, Burton and Judy moved to Rochester, MN, for a surgical residency at the burgeoning Mayo Clinic. He was originally focused on pursuing general surgery, but when presented with his options, he selected neurosurgery since it was a specialty none of his peers were pursuing. Thus began a relationship with the prestigious institution that lasted more than 50 years. During the four-year residency the couple had three children: Scott, Gregg, and Jennifer. When he completed the residency in 1964, Dr. Onofrio returned to the Navy to serve as a neurosurgeon at Bethesda Naval Hospital in Bethesda, MD, achieving a rank of Lieutenant Commander before being honorably discharged in 1968. He and his family then returned to Rochester for good, where he was appointed as staff consultant for the Department of Neurosurgery at Mayo Clinic, eventually specializing in rare and complex spine surgeries. Many years of tireless, tenacious work were followed by many lauds and honors, including memberships and offices in the American Board of Neurological Surgery (Director, Vice-Chair), the American Board of Medical Specialties, the Minnesota Medical Association (Board of Trustees), the Minnesota Neurosurgical Society (President), and the Academy of Neurosurgery (Vice-President). His commitment to his patients and to the humanistic values of Mayo Clinic have led many patients to donate in his name and honor a combined total sum of more than $100 million to the institution. One such grateful patient, John Nassef, became a lifelong close friend who, through a very generous donation, established the Burton M. Onofrio, M.D. Professorship of Neurosurgery in 2011.

Not only was he considered by many to be one of the most experienced spine surgeons in the world, he also became a venerated teacher. The three-month turn for residents through the Onofrio service at Mayo Clinic was an unforgettable educational experience. Although extremely witty and approachable, he demanded the utmost attention to detail, whether in the operating room or in routine patient care. Through his academic tenure, he trained hundreds of residents and fellows in the discipline of complex spine surgery, including some of Mayo Clinic’s most-experienced neurosurgeons still working today.

But a man is not solely defined by his profession. Burton’s wife Judy, a dedicated professional sculptor and fiercely independent woman in her own right, balanced his demanding, strict, clinical world with the wonder and possibility of art and aesthetics. Her passion for collecting spurred a desire in him to start his own collections, from vintage Hall pottery teapots to antique gold pocket watches. Working together, Judy as the main curator, they amassed an eclectic art collection, with pieces from nationally and internationally renowned artists, as well as artists known only within the local art community. More importantly for Burton were the relationships they cultivated with many of the artists they collected, who became some of his most cherished friends. Ultimately, as Judy’s career as an artist evolved, Burton became the silent partner, helping to manage the books for her business, ever-present behind the scenes, always willing to offer support in any way he could, from building the crates to transporting and helping to hang the art. Judy’s involvement in the local and national art community also drew Burton’s full support. For many years, he served as auctioneer for various regional arts fundraisers, perhaps most notably for the Rochester Art Center’s annual Whole Earth Auction. Today, the main gallery space of the Rochester Art Center is named for Burton and Judy Onofrio.

While Burton was dedicated to his life as a neurosurgeon, Judy helped tease out some his eccentricities and encouraged any creative endeavors he expressed interest in: gardening, baking homemade pies and bread, and a passion for animals. At various times, he owned and loved basset hounds, rabbits, fish, birds, a horse for their daughter Jennie, but most of all, Burton loved his exotic domestic cats: Miss Kitty, Delia, Mr. Earl, Pearl, Sugar, Flash, Rocky, WhoDo, Toby, Buddy, and Bingo (to name a few). Those who knew him socially outside of his demanding work recognized his particular eccentricity of crossing the formality of his profession with a daring playfulness; he once flew back to the east coast for his Cousin Dan’s birthday in a suit and tie, a fresh-baked-and-frosted Italian cream cake riding on his lap the whole way.

So many of his friends from both his work and home lives knew and loved him for his sharp wit and sense of humor. Burton prided himself on his encyclopedic vocabulary, acing the New York Times crossword every morning and effortlessly dropping twenty-dollar words into casual conversation.

Dr. Onofrio retired from full-time surgery in 1995, but after a year as a guest professor in neurosurgery at Harvard/Mass General Hospital (for which he flew back and forth to Boston weekly), he accepted a position at Mayo Clinic’s satellite hospital in La Crosse, WI, where he continued seeing patients in clinic and served a proud and personally-fulfilling mentorship role, assisting in neurosurgery until his full retirement in 2015.

While his many private wiles and whims will be fondly remembered by his countless friends, Burton will perhaps be remembered most by the thousands of patients whose lives he saved or improved through his renowned surgical skill and his legendary bedside manner. Whether by a lifelong friend or a grateful patient, Dr. Burton Onofrio will be known forever for his kindness, his care, and his delicious homemade pies.

Dr. Burton Onofrio’s final resting place will be Oakwood Cemetery of Rochester, MN. Memorial services will be held Saturday, June 3rd, 2023, at Macken Funeral Home of Rochester with a celebration-of-life party to follow at a to-be-announced location. For further details on how to honor Burton with a charitable donation, and to share a special memory or condolence, please visit www.mackenfuneralhome.com