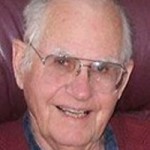 Charles Calhoun Hedges Jr, MD died August 14, 2016 at the age of 91. Charles was gifted with intelligence, compassion and integrity. He was an innovative eye surgeon whose numerous publications helped physicians and patients. He received his medical degree from the University of California San Francisco in 1949. He completed his internship at San Francisco General Hospital and then specialized in ophthalmology with a fellowship at the Mayo Clinic in Rochester, Minnesota followed by residency at Johns Hopkins in Baltimore, Maryland.
An exceptional teacher, he was an instructor at UCLA Medical Center and at the University of Washington Medical School prior to moving to Phoenix where he enjoyed a private practice for over 25 years. During his career he served as Chief of Staff for the Crippled Children’s Services, the Maricopa County Hospital and the Carl T. Hayden VA Medical Center. He was a Past President of the Phoenix Ophthalmology Society. Publications by Dr. Hedges appeared in the American Journal of Ophthalmology and Ophthalmic Surgery. He received accolades for his tear duct surgery technique and for treatment of nevoxanthoendothelioma. He was a Lieutenant in the US Navy.
He is survived by his wife of 66 years Dorothy, daughters Emily Howard (Gordon) Judy Stickel (Reinhold) Elizabeth Glattly (Don) and grandchildren Dane, Kirsten, Logan, Marina and Hayley. Charles had a love of limericks and a keen sense of humor. He enjoyed tennis, hiking, traveling, playing the piano and spending time with his family and friends. A memorial is being planned for September 22.
Donations can be made to Benevilla PO Box 8450 Surprise, AZ 85374 www.benevilla.org