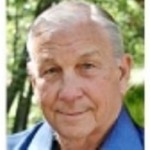 Doctor Charles “Charlie” Piper died peacefully in his sleep at Serenity House on October 4, 2016 after a brief illness. He is remembered for his generosity, integrity, love of vegetable gardening, fishing, bee keeping, dogs, and witty humor.

Charlie was born in Pittsburgh, Pennsylvania on December 2, 1927. He attended Oakmont public schools, Shady Side Academy, and Allegheny College graduating in 1948 with a Bachelor of Science degree. He attended University of Pittsburgh Medical School from 1948 to 1952 followed by an internship at Allegheny General Hospital. He was admitted to surgical residency at the Mayo Clinic in 1953 through 1956 and also completed a preceptorship at Louisville Children’s Hospital.

Charlie served as a Medical Officer in the Navy on the USS Burton Island during the Korean War and at San Diego Naval Hospital.

Having experienced the fine weather of Southern California, he said goodbye to Pennsylvania and came to practice General Surgery in Santa Barbara with Drs. Ken Jennings and John Rydell at Pueblo Surgical Center. During his long surgical career he also practiced with Drs. George Wittenstein, Hewitt Lang and David Kolegraff. He was a fellow in the American College of Surgeons and the Priestley Society.

Charlie served several terms on the Hope School Board of Trustees and was a doctor on the Ranchero Vistadores Ride.

In his retirement years he enjoyed vegetable gardening, ocean fishing, Bonsai, and walking his dog “Oso” who really misses him.

He is survived by Judy, his wife of 53 years, and his two daughters Cynthia Heise (Brant) of Palos Verdes, Susan Nielsen (Erik) of Santa Barbara and four grandchildren: Keaton, Trevor, Piper and Carley.

A reception celebrating his life will be held on Sunday, October 16 from 2 to 4PM at The Santa Barbara Club.

Published in The Santa Barbara News-Press Online Edition from Oct. 9 to Oct. 13, 2016