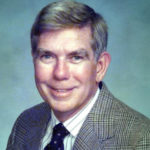 Dr. Charles Dudley Farmer, 85, formerly of Charlotte and now of Franklin, TN passed from this earth on April 29, 2019, while vacationing in Charleston, SC. He was born on November 22, 1933, in Indianapolis, IN, the son of the late Charles and Margaret (Shouse) Farmer. Charlie embodied the qualities of a Renaissance Man. He could converse with anyone from all walks of life and was well-versed in many subjects including history, sports, medicine, wood-working, travel, and gardening to name a few. He was a voracious reader and will always be remembered for his great intelligence, quick wit, and humor-filled life lessons.

The youngest of two children, Charlie graduated from Shortridge High School in 1952 where he was in band and ran track. He attended Indiana University and was a 1956 Phi Beta Kappa graduate. In 1958, he received his Doctor of Medicine from Indiana University graduating with AOA distinction. In the same year, he made the best decision of his life and married Lois Kay Poffenbarger, who was his life-long partner and love of his life. Together the young couple moved to California where Dr. Farmer completed his internal medicine internship at the University of California – San Francisco. Thereafter, he served in the USAF as a Captain and Flight Surgeon in the Mercury Mission in Alamogordo, NM. Following his 2-year military service, he completed his residency training at the Mayo Clinic in Rochester, MN. During that training, he developed his professional interest in the fledgling field of kidney disease (nephrology), hemodialysis, and kidney transplantation. Kay and Charlie moved to Charlotte, NC in 1966 where he established the first dialysis center to treat patients with kidney/renal failure. His practice grew dramatically over the next several decades to become one of the largest centers for the treatment of kidney diseases and dialysis – the Metrolina Nephrology Associates. This group served the needs of countless patients with kidney diseases in Charlotte and the surrounding areas. Dr. Farmer was recognized by Governor Jim Hunt as an Ambassador Extraordinary for The Order of the Long Leaf Pine Society in 1998.

Despite his professional accolades, Charlie found time to attend the countless sporting events, dance recitals, and camping outings that goes with being a parent of young children. After his retirement in 1998, he and Kay had time to travel the world and visit their children and grandchildren for as many milestones as possible. Charlie also served his community as a board member for Charlotte Opera and a volunteer for MedAssist, Habitat for Humanity, the Nature Conservancy, and Christ Episcopal Church.

Charlie is survived by his loving wife of 60 years, Kay Farmer, and their four children and spouses: Stuart and Dawn Farmer of Seattle, WA, Doug and Gloria Farmer of Los Angeles, CA, Randy and Kristina Farmer of Marietta, GA, and Suzanne and Gerry Lake of Franklin, TN. His 10 grandchildren who were a source of joy and pride are: Alex and Ada Farmer, Kyle Farmer, Will Farmer; Nicole Farmer, Sophia Farmer; Ava Farmer, Dylan Farmer, Ansley Farmer, Jacob Lake, and Isabella Lake. He is also survived by his sister Julie (Shouse) Everett of Traverse City, MI, and many nieces and nephews.

The service to celebrate his life will be held at 2 pm on Friday, May 10, 2019, in the chapel of Harry & Bryant, 500 Providence Rd., Charlotte with the Reverend Marty Hedgpeth officiating. Friends will be received following the service.

In lieu of flowers, memorial contributions can be sent to MedAssist or the Nature Conservancy.

Condolences may be offered at www.harryandbryantfuneralhome.com.