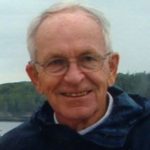 Charles Scott Jr, MD., age 92, passed away on Monday, December 31, 2018, at his home in Atlanta, Georgia. Charles was born on March 18,1926, in Rome, Georgia, to Charles and Camille Scott. Charlie or Scotty, as he was known to friends and family, graduated from Darlington Preparatory School in Rome, Georgia, in 1943. In 1949 he earned his Doctor of Medicine from Emory University in Atlanta, Georgia. He served as ship’s surgeon on the USS Catamount during the Korean War. In 1956 he completed a Fellowship in Urology at the Mayo Clinic in Rochester, Minnesota. He was Board Certified in Urology. As a practicing urologist, he was a longtime member of the Atlanta Urological Group and served as Chief of Staff at Georgia Baptist Hospital. He married Julia Carter in 1950. They had one son, Charles, and three daughters, Camille, Deborah and Mary Lynn. Charlie was a true outdoors man who loved to fresh and saltwater fish in different spots around the world. He spent many summers backpacking in Wyoming with his son. He led an active lifestyle as a runner, swimmer and cyclist. One of his proudest accomplishments was running the Boston Marathon on two occasions. Charlie was a loving father and husband who took great pride in the accomplishments of all of his children and grandchildren. He will be greatly missed. Charles is survived by his children Charles D(Mary)Scott of Decatur, Georgia, Camille(John)Hood of Greenville, South Carolina, Deborah(Bruce)Avery of Houston, Texas, and Mary Lynn(Greg)Smith of Saint Simons, Georgia. He is further survived by his grandchildren Tyler, Rebecca, Julia, Alton, Alex and Luke. He is survived by his brother Eugene Scott of Atlanta, Georgia. He was preceded in death by his wife Julia. The family would like to extend a heartfelt thanks to Janice Stepney for the love and compassion she showed their father as well as their mother during the latter years of their lives . The family requests in lieu of flowers that donations be made in their father’s name to Empowerment Action Center/care of Janice Stepney 3407 Mission Ridge Circle Atlanta Ga 30339. A memorial service will be held on January 18, 2019 at 11:00 a.m. at H.M. Patterson & Son-Oglethorpe Hill 4550 Peachtree Road Atlanta Ga 30319 with a reception to follow.