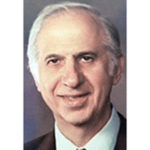 Chris Christu, age 92, of Minneapolis, MN. Formerly of Moorhead, MN. Died peacefully, surrounded by loved ones, on December 1st. Family meant everything to Chris. Raised by his Greek immigrant parents, Nicholas and Despina, he grew up in Birmingham, AL, with his two sisters, Evangeline Pamfilis (deceased) and Helen Bekrakis. Chris served in the U.S. Army during World War II and was a proud member of the 87th Infantry Division, the “Golden Acorns”. The importance of education was instilled in him by his parents at an early age and it continued as a passion throughout his life. He began first grade speaking no English, only Greek, and went on to attend the University of Alabama for college, LSU for medical school, Johns Hopkins for residency, and the Mayo Clinic for a pediatric fellowship. It was in Rochester, MN, that he met the love of his life, Arlyn, his beautiful wife and companion for 50 years until she left us in 2005. Chris practiced for 35 years as a pediatrician with Fargo Clinic MeritCare. He retired in 1992 and moved to Minneapolis. A strong advocate of early education, after retirement he tutored elementary students in reading. Keeping Chris’ memory and legacy alive are his six children Nick (P.J.), Paul (Molly), Denise Dunn (Bob), Eric (Maura), Anthea Onsgard (Brent), Maria (Kevin), and 11 amazing grandchildren ranging in age from 7 to 35. Just three weeks ago Chris met his first great-grandchild. He will also be missed by his dear companion JoAnn Easthouse. A private family gathering will be held at a later date. In lieu of flowers, memorials may be made to Urban Ventures (Minneapolis) or Doctors Without Borders.