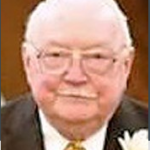 Cletus Troy (C.T.) Frerichs, 97, passed away peacefully at home on May 6, 2021. C.T was born on March 11, 1924 in Coleridge, NE to George Bernard Frerichs and Hedwig Christine Lange. He attended Lone Star Country School and graduated from Coleridge High School in 1941. C.T. was known as “Uncle Butch” or simply “Butch” to loving friends and family. C.T. attended pre-med at the University of Nebraska, Lincoln from 1941-1943. He joined the US Navy in 1943 and the Navy sent him to Miami University of Ohio for a year before finishing his Doctor of Medicine at Nebraska in 1947. C.T. then completed a two-year internship at Lakeside Hospital, Case-Western Reserve University in Cleveland, Ohio. Dr. Frerichs was recalled into the Navy from 1949-1951, serving at the US Navy Hospital, Key West, Florida from 1949-1950, and as Medical Officer of Destroyer Division 10 on the USS Robert McCard from 1950-1951.

During his time in Key West, C.T. met Julia Meadows while she was working for the Red Cross, and they were married on December 10, 1950. C.T. and Julia moved to Rochester, Minnesota in December 1951 where he completed his fellowship in Internal Medicine at the Mayo Clinic. C.T and Julia then moved to Beatrice in 1955 where they would live and raise four daughters. C.T. joined Wayne Waddell and his father J.C. Waddell and practiced Internal Medicine at the Beatrice Medical Group on South 6th Street from 1955-2000. In addition to his practice, C.T. was a hospital physician at Beatrice State Developmental Center from 1958-1984. After retiring from his internal medicine office practice, Dr. Frerichs served as medical director of several nursing homes in Gage County. He remained in the US Naval Reserve while living in Beatrice and retired with permanent rank of Commander.

Family vacations were often spent in Florida or California where Dr. Frerichs served on active duty at various naval bases. C.T. established himself as a generous benefactor to numerous causes in Beatrice and Gage County. He served on the school board of Beatrice Schools for seven years as well as the board of the Gage County Historical Society and the boards of the former Lutheran Hospital and Beatrice Community Hospital. C.T. served as co-chairman of the fund-raising committee of the Carnegie building and planning committee in 2001. He was a member of St. John Lutheran Church beginning in 1955 where C.T. served on the church council and was involved in fund raising missions for the church during his lifetime.

After his wife Julia died, C.T. provided the Friends of Homestead National Monument with the funds to bring back the Allis Chalmers Tractor from the last homestead in Alaska to the first Homestead here in Beatrice. He did this in loving memory of his wife of 65 years. C.T. traveled and saw much of the world including England, Scotland and Germany learning about his and Julia’s ancestors. His Mediterranean cruise with the Navy whetted his appetite for cruises and C.T. enjoyed a three-month journey by ship through the Panama Canal to Australia and New Zealand and back. He enjoyed a long visit to Bangkok, Thailand when his daughter Christine and family were living there, with side trips to the Bridge on the River Kwai, and to India and the Taj Mahal. In later years, C.T. would recall descriptively the many trips he and Julia had taken.

A private family burial service will be held at the Wyuka Cemetery in Lincoln with military honors conducted by the Naval Honor Guard. Memorial services will be held at 11:00 A.M. on Saturday, June 19, 2021 at St. John Lutheran Church of Beatrice with Pastor Arden Dorn officiating. A family prayer service will be held at 10:45 A.M. at the church prior to the service. A register book for signatures will be available at Fox Funeral Home on Friday, June 18, 2021 from 8:00 A.M. until 8:00 P.M. and at the church one hour preceding the service. The family suggests memorial donations be made to Beatrice Community Hospital Hospice, St. John Lutheran Church, or to the Gage County Historical Society in C.T.’s memory. Arrangements entrusted to Fox Funeral Home and Cremation Services of Beatrice. www.foxfuneralhome.net