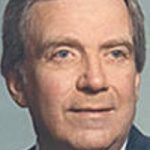 A Celebration of Life Service will be held at 11:00 a.m. on Thursday, April 6, at Vinje Lutheran Church in Willmar. Military honors will be provided by the Willmar American Legion Post #167. Interment will be at the Wang Lutheran Cemetery in Maynard. Visitation will be from 5-7 p.m. on Wednesday, April 5, at the Peterson Brothers Funeral Home in Willmar and will continue one hour prior to the service at the church. www.petersonbrothers.com

Dr. Conrad Ervin Larson was born on May 11, 1929, in Minneapolis, Minnesota, the son of Conrad and Ruth (Bracken) Larson. He grew up in Hawk Creek Township, Renville County, Minnesota, and later moved to Minneapolis. Following the death of his parents, he was raised by his three sisters and they stayed together as a family. In 1947, Conrad graduated from Minneapolis South High School and from Luther College in 1952, with a Major in Music. Upon graduation from Luther College, Conrad was drafted into the U.S. Army and served overseas during the Korean War. On December 19, 1954, Conrad was united in marriage to Florence E. Holien and they made their home in Mora where Conrad and Florence taught school. In 1955, they moved to Ann Arbor, Michigan and Conrad entered medical school. In 1961, Conrad graduated from the University of Michigan Medical School. He served general internship and residency in pathology at Mercy Hospital in Toledo, Ohio. Conrad began his medical practice in Decorah, Iowa and in 1975, moved to Willmar. Most of Conrad’s years of practice were at Rice Memorial Hospital in Willmar, where he served as Chief of Pathology and Laboratory Director and later was Chief of Staff. Conrad was elected chairman of the Willmar School Board and later appointed to the Willmar Municipal Utilities Board of Commissioners. He was a member of Vinje Lutheran Church and was active in the church choir. Conrad has always had a lifelong love for music and fine arts. He enjoyed writing music and performing as a singer, actor and play writer. He also enjoyed reading, traveling and watching old time classic movies.

He is survived by two children, Kristin (and Kevin) Amundson of Golden, CO., and Eric (and Karen) Larson of Apple Valley; two granddaughters, Hannah and Heidi Larson and one sister, Dorrie Walen of Arden Hills, besides other relatives and friends.

He was preceded in death by his parents; his wife, Florence in 2015; and two sisters, Marilyn Goodman and Gertrude Franzen.