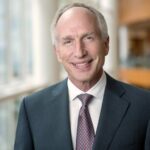 On November 1, 2020, the remarkable life of Dr. David Alan Ahlquist came to an end as he left behind this world he loved so much and began his next great adventure.

Born on July 28, 1951 in Thief River Falls, MN, and raised in St. Paul, David graduated from the University of Minnesota (BA ’73) and Mayo Medical School (MD ’77). He spent his entire storied career at Mayo Clinic, where he left an indelible mark on the institution, his colleagues, and his patients. As a leader, a scientist, and a clinician, he always stayed true to his guiding principles: the needs of the patient, the integrity of the science, and the imperative to work toward impactful change. The revolutionary partnership between Mayo Clinic and Exact Sciences sprung from his trailblazing cancer research. The first result of this partnership is the Cologuard colon cancer test, which has already saved countless lives through early detection. A visionary in the truest sense, David’s North Star in his final years was the development of an affordable, accurate universal cancer test. While he did not live to see his vision come to fruition, he took heart in knowing that his Mayo lab team and Exact Sciences are building momentum toward this world-changing goal.

Throughout his career, he valued the contributions of his collaborators in his Mayo lab, at Exact, and beyond. Together, they took on mighty challenges and shifted paradigms, and any success was their shared success. Even so, he received numerous individual awards in recognition of his excellence, including the first Mayo Clinic Distinguished Inventor Award, the William Beaumont Prize (Amer. Gastroenterological Assoc.), the Mayo Clinic Investigator of the Year, the Mayo Clinic Internal Medicine Research Career Achievement Award, and many others, and he held a named professorship at Mayo. For David, however, the work and its impacts were the rewards. He always looked to the next challenge, the next question, the next opportunity to solve a problem, innovate, and improve lives.

While David devoted his professional life to medicine, his spirit craved nature, and he felt most at home with birdsong in his ears and binoculars around his neck. Whether fly fishing, cross-country skiing, birdwatching, paddling on a North Woods lake, or hiking the Superior Hiking Trail, the world as he knew it was full of wonder and just waiting to be explored. And he instilled this love of nature and this sense of wonder in his children and grandchildren. His deep commitment to the environment and admiration for the work of his wife, Susan, and their three children informed his growing commitment to “whole health,” which recognizes that community, environment, and health are intertwined and inseparable. “We could cure all diseases,” he said in his final weeks, “but if we don’t take care of this planet, we have no future. If we don’t save the planet, what have we accomplished?”

Unbowed by his 2019 ALS diagnosis, David saw his remaining time as an opportunity for adventuring with his family, spending meaningful time with friends, and working toward his vision of a universal cancer screening test. Throughout, his courage and generosity of spirit inspired all who encountered him.

David is survived by his beloved wife of 48 years, Susan; his three children, Aaron (Elizabeth), Daniel (Amanda), and Brooke (Bryant Carlson); seven grandchildren, Brennan, Donovan, Claire, Theoren, Simon, Foster and Ingrid. Also surviving are his siblings, Pamela (Joey) Newman, Dale (Laura), Calvin (Carol), and Carla (John) Heldt, as well his extended family and many nieces and nephews. He was preceded in death by his parents, Al and Virginia Ahlquist, and his sister, Julie.

There will be a celebration in honor of David’s life for family, friends and colleagues at a later date, after the COVID-19 pandemic has passed. In the meantime, friends and family are invited to send their favorite memories of David to his family. Additional tributes to David can be found through Mayo Clinic and Exact Sciences (https://www.exactsciences.com/newsroom/exact-sciences-mourns-the-death-of-dr.-david-ahlquist-a-pioneer-in-early-cancer-detection).

In lieu of flowers, David’s family asks that donations be made in his name to Friends of the Boundary Waters Wilderness (https://www.friends-bwca.org/memorial), which is committed to protecting his beloved Boundary Waters.

David lived and died with gratitude. While he will be missed immeasurably, he leaves the world a more hopeful place. Now and always, may his memory be a blessing.

Ranfranz and Vine Funeral Home is honored to be serving the Ahlquist family; to share a special memory or condolence please visit www.ranfranzandvinefh.com