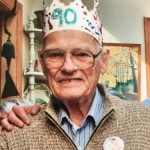 Donald Lloyd Gordon, MD, passed away peacefully in his home overlooking his much-loved Hudson River on May 18, 2017 in Ulster Park, NY. He was 93 years old.

Born and raised in New York City, Donald graduated from Trinity School, was pre-med at University of Michigan then received an MD from New York Medical College. He was Active Duty in the Navy from 1944-45, commissioned as a Lieutenant in 1947 and called back up as a doctor at the beginning of the Korean conflict, where he was seconded to the Army and served in Pennsylvania and San Diego.

Honorably discharged in 1953. He went on to do his surgical residency at the Mayo Clinic. From there he and his growing family moved back to New York area where he took over the practice of his long time mentor, Dr. Chase.

He was head of surgery at Saint Clare’s Hospital and Health Center, and attending surgeon at several hospitals including Polyclinic and Saint Luke’s-Roosevelt.

He married the love and light of his life, Adlynn M. Hartley, on May 29, 1948. A Phi Beta Kappa graduate of Vassar College with a passion for the theatre arts, Adlynn was a successful children’s theatre producer. She founded her own company, Creative Theatre for Children, in the ’70s, serving as executive producer and chair for its full 15 years.

After retiring in the early ’90s to their family home on the Hudson, Donald and Adlynn pursued a shared commitment to conservation. He served on the board of the Hudson River Maritime Museum in Kingston, NY, and supported Adlynn in her service to Save the Esopus Meadowlands Lighthouse, as Trustee for Friends of Mills Mansion, now a museum in Staatsburg, NY and the Garden Club of America, in Kingston.

In 2013, Donald visited Washington DC as part of the Honor Flight program, an event that was immensely meaningful for him.

Donald was preceded in death by Adlynn, who passed away in 2009. He is survived and will be deeply missed by a large devoted family: five children and their spouses: Don Jr and his wife, Lisa Cantrell; Lynn and her husband, Fred Lepore; Doug and his wife, Kim Weller; Wendy and her husband, Larry Rockefeller, and Derek and his wife, Julie Helm Gordon; eleven grandchildren: Donnie and Kiana, David and Ley, Addie, Meredith, Wyatt, Ryan, Andrew, Brian, Richard, Derek and Luke; and three great-grandchildren: Dominic, Kylie and Lilyana.

Donald now rests with his beloved Adlynn by the banks of the Hudson River.

Gifts may be made in Memory of Donald L. Gordon and sent to: Hudson River Maritime Museum, 50 Rondout Landing, Kingston, NY 12401, or electronically to http://www.hrmm.org.