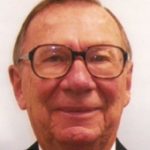 Dr. Donald Rider Holsinger, longtime Martinsville physician, died peacefully at Sovah Health, on Sunday, June 3, 2018. He was 89. He was born in Richmond, VA to Eldon W. Holsinger and Eula Rider Holsinger on May 2, 1929. He moved to Martinsville in 1933 with his family where his father established a dental practice.

Dr. Holsinger graduated from Martinsville High School in 1947 and Randolph-Macon College in 1951 where he was a member of ODK and the KA fraternity. While at RMC he prouded himself for making the football team as a “Long Snapper”. He then attended the Medical College of Virginia, graduating in 1955. After interning at Stuart Circle and MCV Hospitals, he served in the Medical Corps of the U.S. Army before beginning a Residency in Internal Medicine at the Mayo Clinic in Rochester, MN; while there, he received a Master’s Degree in Medicine from the University of Minnesota. He served briefly on the faculty of the Medical School of the University of Alabama before returning to Martinsville to establish a practice in Internal Medicine. He retired in 1996.

He served as President of the Medical Staff of Memorial Hospital, now known as Sovah Health-Martinsville, as well as a member of the Board of Trustees of the Hospital for a number of years. He was a Fellow of the American College of Physicians and was a recipient of the Laureate Award in 1996 from the Virginia Chapter of the American College of Physicians. He served as Clinical Assistant Professor in Internal Medicine of the University of Virginia School of Medicine.

He was also a former President of the Virginia Heart Association. He was former Trustee and Vice-Chairman of the Board of Trustees of Randolph-Macon College and continued as a Trustee Emeritus. He was a former President of Martinsville Kiwanis Club and he was a member of the Boy Scouts of America, achieving the rank of Eagle Scout with Palms.

Dr. Holsinger was a long standing member of First United Methodist Church of Martinsville, as well as member of the Charles Wesley Sunday School Class. He served as a Trustee and Member of the Investment Committee of the Church.

He was preceded in death by his parents and a brother, Eldon W. Holsinger, Jr. and by his daughter, Laura Jane Holsinger, as well as a granddaughter, Erin Katrina Marsh.

A funeral service will be held at 11 a.m. on Thursday, June 7, 2018 at First United Methodist Church of Martinsville with Rev. Keith Richie officiating. Visitation will be from 6 p.m. to 8 p.m. on Wednesday, June 6, 2018 at Norris Funeral Services, Martinsville Chapel and other times at the home. Burial will be private.

In lieu of flowers, the family requests memorials to be made to either the First United Methodist Church of Martinsville or the Donald Holsinger Endowed Scholarship Fund at: MCV School of Medicine Development Office, Virginia Commonwealth University, P.O. Box 980022, Richmond, VA 23298.

Norris Funeral Services, Inc. and Crematory of Martinsville, VA is serving the Holsinger family. Online condolences may be made at www.norrisfuneral.com.