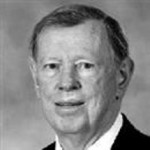 Dr. Donald L. Lewis, 84, of Columbus, passed away Saturday, August 15. He was born on August 14, 1931, in New Lexington to the late David J. and Ethel Grace (Trout) Lewis. In addition to his parents, he was preceded in death by the great love of his life, his wife of 40 years, Sally R. (Reeves) Lewis and his brothers David, John and Linton. Dr. Lewis was a humble man and a great storyteller who will be greatly missed by his sons, Stephen (Betsy) and Jeffrey (Linda); his grandchildren, Paisley, Emily, Mollie, Meagan and Stephen; his brother, Bob (Joyce); and many dear friends. Donald kept the book “I Could Never Be So Lucky Again” on his counter and believed that it was truly the story of his life.
He graduated from The Ohio State University in 1954 with a degree in Optometry, then joined the Air Force before returning to The Ohio State University and earning his medical degree. He followed that with a fellowship at the Mayo Clinic, and then worked as an ophthalmological surgeon for 44 years. He served for several years as the Chairman of the Section of Ophthalmology at Riverside Methodist Hospital, where he was the first surgeon at that hospital to implant an artificial lens following cataract removal.
Dr. Lewis enjoyed his time at the Mayo Clinic and continued to be a part of their organization for many years as a member of the Doctors Mayo Association, past president of the Association of Mayo Eye Fellows and the Alumni Association. Donald was honored with the Scottish Rite Thirty-Third Degree, and was also inducted into the New Lexington High School Alumni Hall of Fame. Following his retirement, he enjoyed traveling, learning the game of golf and building model airplanes.
He was a member of Trinity United Methodist Church, 1581 Cambridge Blvd., Columbus, where a celebration of life service will be held on Saturday, August 29 at 2 p.m. with Reverend Dr. Christopher Heckaman officiating. Family will hold a reception at the church following the service. Memorial contributions may be made in Donald’s memory to the Trinity United Methodist Church.
Please visit www.schoedinger.com to share memories or condolences with the family. Arrangements by Schoedinger Northwest Chapel, 1740 Zollinger Road.