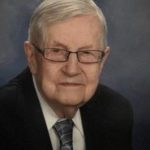 Dr. Schmidt was born on a farm in Wittenberg, Wisconsin on January 29, 1922. He received a Bachelor of Science degree in agricultural bacteriology from the University of Wisconsin in Madison in 1944, and Doctor of Veterinary Medicine degree in 1947 from Michigan State College. This class was the last in the war-time accelerated program in veterinary medicine at that school.

In 1966 he accepted a position as Professor of Veterinary Pathology at the College of Veterinary Medicine, University of Missouri, Columbia. In 1972 he was one of nine who successfully passed the first national certifying examination of the American College of Veterinary Pathologists in veterinary clinical pathology. Over the course of his tenure at MU he prepared 23,500 microscopic and macroscopic transparencies for use in teaching of veterinary clinical pathology that were used for many years after his retirement. He retired from MU in 1992 as Professor Emeritus and continued working part time for the pathology department until he was 80 years old.

Donald was a faithful servant of the Lord Jesus Christ and longtime member of Trinity Lutheran Church where he served as elder. His parting thoughts to all: Remember—Our death is not the end. Ponder the shortness of life, the inevitability of death, and the necessity of being acceptable to God. The latter can only be accomplished by receiving Jesus Christ as your personal Savior.

In lieu of flowers, memorials may be given to Trinity Lutheran Church, 2201 W. Rollins Road, Columbia, MO 65203.