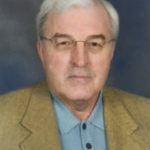 E. Jerome Hanson, Jr., age 74, passed away on January 28, 2018 after a brief illness. A retired neurosurgeon of Greater Kansas City, Dr. Hanson was born at Fort Francis E Warren (Cheyenne, Wyo.), the son of Ernest Jerome Hanson, Sr., and Agnes Hanson/Hoenk. Following WWII, his family lived in Bismarck, N.D., and then moved to Grand Forks. He earned a Bachelor of Arts degree with honors from the University of North Dakota in 1965.

He completed his surgical internship in June of 1970 and continued his neurosurgical training in residency at the Mayo Clinic in Rochester, Minnesota. While there, he spent a year doing cerebral vascular research under the supervision of the famed Dr. Thoralf M. Sundt, Jr. In 1978, he completed a Master’s in neurologic surgery from the Mayo Clinic School of Graduate Medical Education, University of Minnesota.

Following his extensive education and training, Dr. Hanson then came to Kansas City, Missouri to practice. Throughout his career, he worked at several area hospitals. His primary site was St. Luke’s, although he was also affiliated with Children’s Mercy from 1975 to 1999. He served in the US Army Reserve Medical Corps throughout the 1970s and for a few years was a clinical professor of neurological surgery at UMKC. In 1979, he achieved board certification by the American Association of Neurological Surgeons.

During his active clinical years, Dr. Hanson was a member of the Metropolitan Medical Society, the Missouri Medical Society, and the American Medical Association.  He also belonged to neurosurgical specialty organizations. In 1990 he was elected to membership in the prestigious Neurosurgeons Society of America. He served as President of the Missouri Neurologic Surgeons

Association in the late 1980s and for many years was Vice President of the St. Luke’s Hospital Foundation for Medical Education.

In 1993, he was appointed as Director of Surgical Oncology at the former Trinity Lutheran Hospital in Kansas City, where he assumed a leadership role in a multiple-center cooperative study on the development of a more effective treatment of central nervous system brain tumors.

A few years later he limited his surgery practice to complex spinal stabilization and reconstructive procedures. He established the multi-faceted MidAmerica Spine Center and participated in the planning, development and construction of Doctors Hospital in Leawood, which opened in 2002. He also provided outpatient neurosurgical consulting services to patients in Pittsburg, Kansas, and Fort Scott, Kansas.

In his leisure, Dr. Hanson enjoyed downhill snow skiing as well as scuba diving and sailing in the British Virgin Islands. He learned to pilot aircraft in the 1980s and held multiple piloting certifications. After retirement he put his energy into building a Cobra replica for himself, and restoring a Studebaker Avanti for Mary Anne. He discovered amazing friendships throughout the automobile community in the process.

He is survived by his loving wife of 51 years, Mary Anne; son Christopher (Katrina) of Shawnee Kansas; daughter Elizabeth Ransford (Shawn) of Charleston South Carolina; four grandchildren: Stuart and Sophia Hanson, Linnea and Zane Ransford; and brother Stephen Hanson of Glendale, California. Jerry and his wife loved Golden Retrievers, and he will be missed by Trigger as well as his family and friends.

In lieu of flowers, donations to Wayside Waifs would be greatly appreciated.