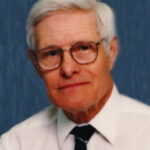 Ean Crennell died peacefully at St. Mary’s Hospital in Madison, on Saturday, Feb. 15, 2020. He was born in a rural rectory in Pendock, Worcestershire, England on July 10, 1927, to the Rev. Henry Fraser Crennell and Gladys Mary Crennell. Ean graduated from King’s School, Worcester in 1945 and then served for three years in the Royal Air Force, including one year spent in India. He enrolled in medical school at Dublin University (Trinity College) in Ireland in 1949 and while there… he met Ruth Blackburn whom he married in 1954. Upon graduation from medical school in 1955, he and Ruth emigrated to Newfoundland, Canada where he completed a one-year internship and then worked in general practice for 18 months before being accepted into an Anesthesiology residency program at the Mayo Clinic in Rochester, Minn.

Ean joined Madison Anesthesiologists in 1961 and spent many years working at St. Mary’s Hospital and Madison General (now Meriter) Hospital. Toward the end of his career he became an ER physician, spending several years serving the hospital in Plymouth, Wis.

A thoughtful, intensely private man, with a slightly irreverent sense of humor, Ean’s work and family were the most important things in his life. He loved living on his family’s small horse farm and was always an enthusiastic supporter of his wife’s many horse activities. He was a voracious reader of history, especially the history of World War II, and also read widely about the history of aviation. In retirement, he studied astronomy, took piano lessons and enjoyed the company of his beloved Swedish Vallhund dog, Rolf.

Ean is survived by his wife, Ruth of almost 66 years; two sons, Malcolm (Mandie) and Peter; and by Peter’s three children, Helena, Julian, and Maya. He is also survived by a niece, Mary Griffin, of British Columbia, Canada.

Ean’s family wishes to thank the staff of the SSM Dean Medical Group for the wonderful care he received for many years, in particular from Dr. Amy Daley, the staff of 5SW at St. Mary’s Hospital and their hospice care organization.

A memorial service will be held at ST. ANDREW’S EPISCOPAL CHURCH, 1833 Regent St., Madison, at 11 a.m. on Saturday, Feb. 29, 2020. The family will greet visitors from 10 a.m. until the time of the service. Please, no flowers. Online condolences may be made at www.gundersonfh.com.