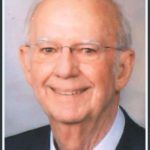 Edward John O’Connell, M.D., 83, of Rochester, completed his life plan peacefully at his home surrounded by his family on Monday, Dec. 11, 2017.

He married Maureen Gallagher, on June 7, 1958, in Grand Forks, N.D. They moved to St. Louis during his medical school before making their home in Rochester. From 1961 to 1965, he did his pediatric residency at Mayo Clinic. In 1965, he was appointed to Mayo Clinic staff in the Department of Pediatrics and Allergy/Immunology. In 1966, he was drafted to Air Force and retired from service with the rank of Captain in 1969. He returned to Mayo Clinic where he was a professor of pediatrics, allergy/immunology and Mayo Clinic College of Medicine, president of the American Association of Certified Allergists, president of the American College of Allergy, Asthma and Immunology, and president of the Irish and American Pediatric Society. He received the following awards: “Teacher of the Year” Hall of Fame in 1987, “Distinguished Mayo Clinician” award in 1995, “Gold Headed Cane” award from the American College of Allergy, Asthma and Immunology in 2003, and the “Distinguished Service Award” in 2005 from the American College of Allergy, Asthma and Immunology.

In his retirement, Ed “went back to school again” and was the editor-in-chief of the Annals of Allergy Asthma and Immunology medical journal.

He loved his family first and also enjoyed nature, music, fishing, teaching, dogs, traveling and especially woodworking, making toys for children that he donated to the Rochester Ronald McDonald House.

He loved to make people laugh; his unique perspective, stories, brilliant mind and sense of humor kept everyone on their toes. A true gentleman who was full of love, compassion and faith.

He is preceded in death by two daughters, Kathleen (Mark) Krebsbach and Colleen O’Connell.

The memorial Mass will be held at 10:30 a.m. Tuesday, Dec. 19, at St. John the Evangelist Catholic Church, with the Rev. Msgr. Gerald Mahon officiating. Visitation will be one hour prior to the Mass at the church. Private burial will be in Calvary Cemetery.

Macken Funeral Home is assisting with the arrangements and online condolences are welcome at www.mackenfuneralhome.com.