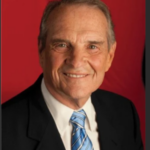 Dr. Edward Carl Rosenow III died on December 21, 2021 at the age of 87 in Rochester, Minnesota. Ed was devoted to his children Sheri (Brian O’Shea) and Scott (Kathy), his grandchildren Christian (Hana Newman) and Kate, and his wife of 64 years Connie Grahame Rosenow. Ed was compassionate, and humble, enjoyed engaging with people, and had a great sense of humor. He left a note that he wants only funny sympathy cards so he can have a last laugh. He was endlessly curious about science, nature, and the world, and filled his house with books on subjects such as geology, sharks, and the space program. Most of all, his passion was his work as a physician and teacher, and the art of medicine.

Born in Columbus Ohio on November 2, 1934 to Dr. Oscar and Mildred Rosenow, Ed had one sister, Kay. He attended Upper Arlington High School in Columbus, Ohio, where he swam competitively. Ed earned his undergraduate and medical degrees from Ohio State University, and an M.S. from the University of Minnesota. He met Connie while both were studying at Ohio State. He completed a residency and fellowship in pulmonary disease at the Mayo Clinic College of Medicine and Science. He served two years as an Army medical officer at Fort Monmouth in New Jersey. He joined the Mayo Clinic in 1966 as a consultant in Internal Medicine (Thoracic Diseases).

Ed came from a medical family who were his role models and mentors. As a young man he visited patients in the hospital or their homes with his physician father, from whom he learned the importance of a good bedside manner. Ed came to believe that physicians are given a gift by being invited into a patient’s life to make a difference; a lesson that he applied and taught throughout his career.

During his 31-year career at Mayo he held leadership positions that included President of the Mayo Clinic Staff and Chair of the Division of Pulmonary and Critical Care Medicine. He was also President of the American College of Chest Physicians. He also served on its Board and frequently presented his renowned collection of pulmonary slides at its national and international conferences.

Ed most cherished his Mayo Clinic Karis (caring) Award, which is given to staff that live the Mayo Clinic Values in an extraordinary way. He believed that, many times, caring and compassion are more effective in healing than the power of modern medicine.

Ed is remembered as “the quintessential Mayo Clinic doctor; a man of high character and stature, of great knowledge, and working with a clear sense of purpose,” in the words of a former student. He published or contributed to numerous scholarly publications, as well as to four amici curiae for the U.S. Supreme Court on tobacco cases. He served as a consultant to NASA’s space station FREEDOM at the Johnson Space Center in Houston, Texas.

As a professor of medicine at Mayo Medical School Ed influenced the education of many young physicians. Ed was recognized as Teacher of the Year in Internal Medicine five times and was elected to the Mayo Fellows Hall of Fame of Outstanding Teachers. The Mayo Clinic Department of Medicine honored him by establishing a teaching award in his name: the Edward C. Rosenow Trainee Teacher of the Year. Ed was the Arthur M. and Gladys D. Gray Professor of Medicine. Two professorships in Internal Medicine bear his name: the Edward C, Rosenow III, M.D. Professorship in the Art of Medicine and the Betty Knight Scripps Professorship.

Ed led a very active life and enjoyed riding his bike on Rochester’s trails, attending his grandchildren’s sporting events, working in the yard, and meeting with his many close friends.

After his retirement at the end of 1996, Ed continued mentoring young physicians, working on projects through the Mayo Clinic Emeritus office, and caring for patients at the Salvation Army Free Clinic, where he had volunteered for 22 years. He greatly enjoyed his weekly meetings with Mayo Emeritus friends to discuss the latest issues in medicine, current events, and their personal lives.

A memorial service and celebration of Ed’s life will be planned for some time in 2022.

The family requests that memorial gifts be designated in memory of Dr. Edward Rosenow to Mayo Clinic Education to support programs that ensure the success of the next generation of medical, scientific, and allied health professionals.

Under “designate my gift to” please select “other” and type “Education”

Mail – Send in a check to Mayo Clinic Department of Development, 200 First Street SW, Rochester, MN 55905 -In the memo line of the check or on a separate note please indicate that the gift is “in memory of Edward Rosenow for Education”

Ranfranz and Vine Funeral Home is honored to be serving the Rosenow family; to share a special memory or condolence please visit www.ranfranzandvinefh.com