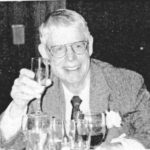 Dr. Edward Verhines Spudis, aged 93, died on March 25, 2019 at Salemtowne Retirement Community, Winston-Salem, North Carolina, where he and his wife have lived for the past five years.

Dr. Spudis was born on April 25, 1925, in Sykesville, MD, to Anthony (John) and Myrtle Umbaugh Spudis. He grew up in Washington, DC and graduated from Anacostia High School, where he was senior class president. Immediately following graduation in 1943, he joined the US Army and later served with the Engineer Corps in occupied Japan.

On return to the United States, he first attended Southern Methodist University, in Dallas, Texas, where he played on the football team.  He completed his undergraduate work, and received his M.D. diploma from the School of Medicine, at the University of Maryland.

While he was at the University of Maryland he spotted a young co-ed, Martha Grace Likens, who became the love of his life. Upon graduation from medical school in 1953, he and Martha were married and moved to Detroit, Michigan for his internship at Detroit Receiving Hospital, followed by a medical residency at the Veterans Hospital there.

In 1955, they moved to Rochester, Minnesota for a neurology residency at the Mayo Clinic, where he also received an M.S. degree in electroencephalography (EEG).  Following three snowy years in Rochester, relocating to North Carolina was inviting and in 1958 they moved to Winston-Salem where he joined the faculty of the Bowman Gray School of Medicine.  Dr. Spudis taught at the medical school, conducted research and, for over thirty years, saw neurology patients in the clinic and EEG lab.

In 1965, he joined a private practice at Forsyth Medical Park but continued to teach at the medical school for many more years.  He was most pleased by the honor of being voted Teacher of the Year by the Bowman Gray students in 1963.

At Forsyth Hospital he opened and directed the EEG lab, later became Chief of Staff and founded the annual “Case of the Year” competition for the medical staff.  During the course of his medical career, he published numerous articles and academic papers in medical and scientific journals describing his research in neurology and applications of the EEG.

Dr. Spudis retired from private practice in 1989 with no intention of being idle.  Through the end of 2005, he provided neurology services at the Rehabilitation Department of Forsyth Medical Center, an MRI facility, the Veterans Administration Clinic in Winston-Salem, and the Community Care Center Free Clinic.

Dr. Spudis had wide-ranging interests and hobbies.   He took classes in sculpting, computer programming, and playing a variety of musical instruments.  After attempting the cello, clarinet and trumpet, he ultimately settled on the alto saxophone and was pleased to be included in several performances of a Moravian Band. He enjoyed photography, creating early home movies; and reading, particularly astronomy, geography and emerging science.  He was in awe of the nervous system, the scale of the cosmos and relished pondering the spiritual aspects of both.

Together, Ed and Martha were early members of the Unitarian Universalist Fellowship in Winston-Salem, joining in 1962 and continuing to support and attend the Fellowship for almost 60 years.

During his many years of practice, he discovered an enthusiasm for creative writing and began jotting down humorous poems and musings, prompted by his professional experiences. A number of these poems and cartoons were published in medical journals. After retirement, Martha began gathering and editing Ed’s writings.  The first collection, Brainstem Storms, was published in 2004, followed eventually by six more volumes, that concluded with the composite, Circling the Lifespan, in 2017. These volumes are treasured by his family and friends as a lasting reminder of his philosophy, wit and humor.

Those who knew him came to appreciate his intelligence, kind and gentle manner, and ability to inspire with a chuckle.  We loved him dearly and he will be missed beyond expression.

His family would like to express their gratitude to the nursing staff who provided compassionate, tireless and dedicated care, and also to the devoted members of the Salemtowne staff.

A memorial service will be held at the Unitarian Universalist Fellowship of Winston-Salem, 4055 Robinhood Road, Saturday, April 13, 2019 at 4:00 pm. Online condolences may be made at www.Hayworth-Miller.com.

“(I am) certain both science and poetry encourage us to ponder extremes.  Both lead back to the ‘Why are we here?’ question.” EVS, 2008