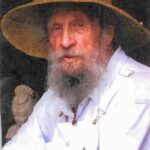 The oldest of four children, he was born in 1927 in New York City to Godfrey Ernest Updike and Mary Alice Riddick. Upon graduating high school at 16, he attended Colgate University and received his M.D. in 1949 from Columbia University College of Physicians and Surgeons. In 1950 he married his high school sweetheart, Lillian Sturgis, before moving to Minnesota for a fellowship in surgery at the Mayo Clinic. After completing his residency in 1957, he and his wife moved their young family to Ocala, Fla., where he practiced surgery for the next 30 years. During the Korean War, he served in the United States Navy as a doctor on troop transport ships and continued his service in the Navy Reserve until he retired in 1987.

In 1991, they moved to western North Carolina, where they bought a small farm perched on an east-facing hillside in the beautiful Little River Valley near Brevard. He spent his remaining years enjoying family gatherings at the farm and pursuing his interests in organic gardening, sustainable agriculture, growing fruit trees, learning to play banjo and bass fiddle, singing in the St. Philip’s Episcopal choir and researching family genealogy.

Throughout his life, he had an insatiable curiosity about people and the world around him. He had an innate need to understand what made things work, and how to make them work better, whether it be the human body, an animal, the soil or a piece of equipment. He was an inspiration to his family and friends, always eager to learn about us and what we were thinking and doing. He was a prolific storyteller, who never told a story without extensive detail, laughter and a twinkle in his eye. He showed us a way through life that was true to self, nature, humanity and spirit.

A celebration of his life with family and friends is being planned for a later date when they can be together safely.

The family would like to give special thanks to the staff of College Walk, Care Partners Hospice of Transylvania County, and Moore-Blanchard Funeral Home for their care and support.