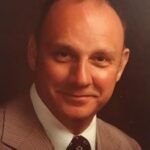 Eugene Quincy Parr, M.D., went peacefully to his heavenly home on November 19 at Central Baptist Hospital in Lexington, Kentucky. Dr. Parr was born on August 4, 1925, in Erlanger, Kentucky to Sally and Franklin Parr. He met his beloved wife, Joan, at Berea College. They were married 65 years before her death in 2015. In addition to his parents and his wife, he was preceded in death by his siblings, Blaine Parr and Lucille Parr, a daughter-in-law Lucia Boland Parr, and a granddaughter, Bethany Parr. He is survived by his three children and their spouses, Eugene Q. Parr, Jr. (Dee Lisa), Jeffrey W. Parr (Peggy), and Valerie Parr Hill (Will). Five grandchildren survive him: Jenny Robbins (Chris), Christy Byrum (Brad), Gene Hill, Jeffrey Hill, and Christopher Parr. Six great-grandchildren and a very special niece, Kimberly Rich Evans (Chris), also survive as well as other nieces, nephews and cousins. Dr. Parr attended Berea College and then went on to the University of Louisville Medical School, receiving his medical degree in 1951. He practiced in Berea as a family physician before moving to Rochester, Minnesota. There he completed a residency in orthopaedic surgery at the Mayo Clinic. The family moved to Lexington, Kentucky where he began the practice of orthopaedic surgery with the Lexington Clinic from 1960-1965. Dr. Parr entered private practice with Dr. Samuel Hodges in 1965 and solo private practice in 1968. His son, Jeffrey W. Parr, M.D., joined him in 1987, and they practiced together until Dr. Eugene Parr retired in 1995. In 1970 as the Billy Graham Advance Team was preparing for a Crusade in Lexington, Gene was asked to serve on the Executive Committee. This experience had a profound spiritual impact on Gene and Joan and their family, and they maintained a close association to the Billy Graham Evangelistic Association the remainder of their lives. Subsequent to this, they became members of Immanuel Baptist Church. The pastor, Dr. Ted Sisk, his wife Ginny, the Parr’s and another couple traveled to Coral Ridge Presbyterian Church for several days of training in Evangelism Explosion (EE) by Dr. D. James Kennedy. They began training others in Lexington and served in EE for ten years as their faith in Christ and the faith of others continued to grow. Dr. Parr was the first physician member to serve on the Board of Central Baptist Hospital. In addition, he served on the Board of Trustees at Berea College from 1966 to 1972. The Eugene Q. and Joan Parr Healing Garden was dedicated on October 13, 2016, and is located near the entrance of Baptist Health Lexington Cancer Center (formerly Central Baptist Hospital). In retirement, Gene thoroughly enjoyed spending time with his cherished wife until her death in 2015. He also took great pleasure in his entire extended family and the art of woodworking. He produced over 100 pieces of furniture, helping to decorate the homes of his children and grandchildren. His was a life well lived for Christ. Visitation will take place Saturday, November 23, at Immanuel Baptist Church in The Worship Center (Sanctuary) from 10:00 AM – 12:00 noon with the funeral following immediately at 12 noon. Betts & West Funeral Home is honored to serve Dr. Parr and his family. Online guestbook www.BettsandWestfuneralhome.com