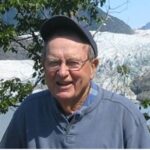 Everett D. Hendricks, age 100, a nearly 50 year resident of Prescott, Arizona passed away Friday, December 3, 2021. He was born on a farm near Lohrville, Iowa in 1921. He served in the USN from 1943-46, ending the war as a lieutenant in command of a sub-chaser in the Pacific. He returned to Coe College in Cedar Rapids, completing a BA in 1948, and married Florence Churchill that same year. They made their first home in Chicago, where he completed medical school at Northwestern University. He served his internship in 1951 at Iowa Methodist Hospital in Des Moines, and his residency in urology from 1952 to 1954 at the Mayo Clinic in Rochester, Minnesota.

In 1955, Everett and Florence moved with their two sons to Pasadena, California, where he joined a urology practice of Mayo trained doctors, and became an Associate Professor of Urology at USC Medical Center. The family camped extensively in the Mohave Desert, and enjoyed many weekends water-skiing on Lake Mohave. In 1973, Everett and Florence moved to Prescott, where Everett became the first to practice urology in northern Arizona, consulting at the VA hospital and in private practice at Yavapai Hospital.

Upon retirement, Everett and Florence spent winters in Sun City, where Everett took up tennis, a game he played into his early 90’s. At 75, he hiked up the 20,000 ft. Mount Kilimanjaro in Tanzania. Everett and Florence also traveled to Europe, and to many parts of Mexico. Everett became an avid whitewater rafter, and together, they challenged many of the rivers of the west. Sadly, Florence passed away in 2001.

In his later years, Everett continued his travels in the west and Mexico, often with family and friends. He became a resident of Las Fuentes in Prescott in his early nineties, was active in book clubs and bridge games, reading extensively about the west, the polar explorations and Mount Everest expeditions.

Everett was also preceded in death by his parents, two brothers and two sisters, Milton, Glenn, Verna, and Hazel. He is survived by his sweetheart and companion of nearly 20 years, Phoebe Whittington; his sons and their wives, Jeff (Pam), and Craig (Kris); grandchildren, Kris, Ashley, Brian and Michael; and one great grandson, Logan. The family is especially grateful for Phoebe, who spent many, many comforting hours by his side, especially in his last several weeks. The family appreciates the care Ev received at Las Fuentes, Marley House and Accent care.

At Everett’s request, no services are planned.