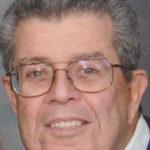 Francis Peter “Frank” Milone, M.D., 86, of Easton, Md., passed away on August 16, 2018, in Easton. Frank was born on Sept. 11, 1931, to the late Pasquale and Elvira Faragasso Milone. He graduated from St. Peter’s Prep and St. Peter’s College, both in Jersey City, NJ. He then attended Georgetown University Medical School. He completed both an internship and fellowship at Georgetown before moving to Minnesota, where he completed a fellowship in Orthopedic Surgery at the Mayo Clinic, and attained a Master of Science in Orthopedic Surgery at the University of Minnesota. Dr. Milone became board certified and was admitted to the American Academy of Orthopedic Surgery in 1965. He served in the United States Army, 101st Airborne in Fort Campbell, Kentucky, as a military surgeon and attained the rank of Captain. He moved to Maryland and joined Prince George’s Orthopedic Associates, becoming the Trustee and a Managing Director of the practice before retiring in 1995 after 30 years of distinguished service to both the practice and to the community. In addition, Dr. Milone practiced at many hospitals including Providence in Washington, DC; Southeast Community; Doctor’s in Lanham; and Prince George’s General. He was instrumental in the design and construction of Southern Maryland Hospital Center in Clinton, Md. He was a member of the staff for 20 years, as Chief of Orthopedics for 10 years, Chief of Staff for two years and member of the Board of Trustees for many years. He contributed multiple articles to orthopedic journals, held teaching positions at Georgetown and Howard Universities and was a member of Prince George’s County Medical Society. Frank was an active supporter of his local churches, Holy Family in Hillcrest Heights, Md. and St. Mary’s in Piscataway, Md. He raised funds and helped design and construct new churches at both parishes.

Frank relocated from Prince George’s County to Easton, Md. in 1998, where he continued his dedication to philanthropy by working for the greater good of others and supporting his local parish. He was the Chairman of the Building Committee of Saints Peter & Paul Catholic Church in Easton and considered his church to be “one of the most beautiful churches on the Eastern Shore.” For his efforts in helping to design and fund the church, he received a Papal Commendation. Most recently, he was instrumental in the fundraising and design of the Family Life Center, due to be built in 2019.

Frank was also an active member of the Knights of Columbus, serving as a fourth degree Knight. He was extremely invested in Choices for Life Pregnancy Help and Resource Center in Easton, served on their developmental board and often spoke of his pride in the supportive efforts of the agency. Frank also served on the boards of the Talbot County Children’s Trust and the Talbot County Mental Health Association. His commitment to various organizations was his way of demonstrating his values and expressing his gratitude to God for the blessings bestowed upon him in his lifetime.

Frank’s hobbies included traveling, reading, yard work, sculpting, and watching his beloved Washington Redskins. He enjoyed working out at the local YMCA and visiting with his friends, but his true passion was always his wife, children and grandchildren. Spending time with them was his greatest joy.

In lieu of flowers, memorial contributions may be made to the Saints Peter & Paul Building Fund, 7906 Ocean Gateway, Easton, MD 21601.