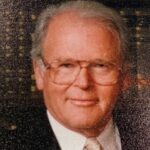 It is with great sadness that we announce the passing of Dr. Gabriel Jeremias on Thursday, August 26, 2021 at the Hamilton General Hospital at age 86, one week shy of his 87th birthday. As if on cue, upon his passing, the skies became dark and opened up with a torrential downpour. The world suddenly became a much worse place.
He was the loving husband of Cary Jeremias (nee Bogolub), devoted father to Lawrence Jeremias (Olena) and Susan Waxman (Marc) and loving grandfather (Buppy) to Talia Waxman and Sara Waxman.
Dr. Gabriel Jeremias was born in Satu Mare, Romania on September 4, 1934, cherished son of Dr. Eugene and Maria Jeremias (Weitzner) and loving brother of Martin Jeremias. At age three, he and his family fled Romania to escape the Holocaust and later settled on a farm in Niagara Falls, Ontario. He attended Queen’s University Medical School, graduating in 1958 and trained in Orthopedic Surgery at the Mayo Clinic in Rochester, Minnesota with a stint in Chicago where he met his loving and devoted wife Cary. They married in 1965 and settled in Hamilton, Ontario where he built a successful orthopedic practice over 40 years. He purchased a large, historic property in Dundas in 1969 with his brother Martin where they built two homes, raising their families next door to one another.
He had a very strong work ethic and lived each day with integrity, optimism, generosity and a great sense of humor. He would often say, “if you laugh, people laugh with you but if you cry, you cry alone.” He loved gardening, playing tennis and golf, walking, painting, writing poetry and other musings, boating and nature. He will be missed terribly by all those whose lives he touched.