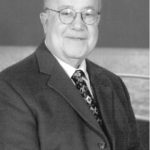 Khoury, George H., MD, FAAP, FACC 85, Pediatric Cardiologist, died Wednesday, Oct. 18, 2017. Rosary 4 p.m. Sunday, Oct. 22; Funeral Mass at 10 a.m. Monday, Oct. 23, both at Church of the Magdalen Catholic Church. George was born in Mansourah, Egypt on Aug. 20, 1932 to Habib and Helene Khoury. He graduated from Cairo University Medical School in 1955. He came to the United States in 1958, when he was awarded a grant to research at the National Institute of Health (NIH). Ultimately, he pursued a career in Cardiology, with fellowships in Pediatric Cardiology at the Children’s Hospital in Denver (1961-62), Mayo Clinic in Rochester (1962-63), and the Hospital for Sick Children, University of Toronto (1964-66). He had a long and illustrious career both academically and clinically. He was especially proud of his leadership positions at WVU Medical School from 1967-76 and at the University of Kansas School of Medicine-Wichita. He was a noted researcher and prolific publisher. Additionally, he was in private practice in Wichita from 1976-96 and found the work to be very fulfilling. George was a significant philanthropist, donating a tremendous amount of time and energy as a board member for numerous charity organizations. Above all, Papa George valued his job as a grandfather as his most important one! Preceded in death by his parents; siblings, Joseph, Denise (Wassef), Odette (Ackaoui). He is survived by his wife of 52 years, Theresa Khoury of Wichita; children, Danny (Rana) Khoury of Woodbury, MN, Sheen (Jenny) Khoury of San Mateo, CA, Helen (Dwight) Smalley of Wichita, Paul Khoury of Minneapolis, MN; grandchildren, Ian, Ryan, Morgan, Lauren, Alex, Kaila, George, Logan, Ben, Charlie, and Elaine. Memorials established with: Church of the Magdalen Catholic Church, 12626 E. 21st St. N., Wichita, KS, 67206; Center of Hope, 400 N. Emporia St., Wichita, KS, 67202. Downing & Lahey East. www.dlwichita.com